Moomba (also known as the Moomba Festival) is held annually in Melbourne, Australia. Run by the City of Melbourne, it is Australia's largest free community festival. The Melburnian tradition is celebrated over four days, incorporating the Labour Day long weekend, from Friday to the second Monday in March. Moomba is culturally important to Melbourne, having been celebrated since 1955, and regularly attracts up to a million people, with a record attendance of 3.8 million (2.3 million tourists) set in 2018.

In 2003, the event was renamed Melbourne Moomba Waterfest and is centred on the Yarra River.

Traditional events include the Moomba parade, crowning of Moomba monarchs, fireworks displays, carnivals in the gardens along the river, river activities including watersports, water floats and the birdman rally, as well as live music and bands.

In 1951, Australia celebrated fifty years of Federation with a parade and the staging of the theatre production "An Aboriginal Moomba: Out of the Dark". In 1954, Queen Elizabeth II visited the city for the first time as reigning monarch, and the City Development Association and the Melbourne City Council proposed an autumn carnival to be known as "Moomba". A committee was formed in July, 1954 to organise and fund the event, successfully allocating £10,000 to its inaugural running. Before the event's first year, controversy was created when Labor Councillor Frank Williams resigned from the committee, branding the planned carnival as a "Bourke street joke for the benefit of shopkeepers". A promotional theme song "Come to Melbourne for the Moomba" was written by Jack O'Hagan. 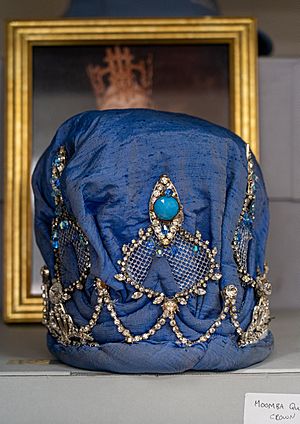 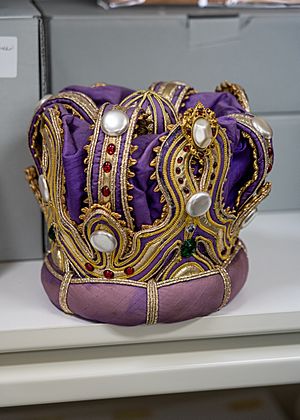 The first Moomba was a 15-day festival officially opened on 12 March 1955 by the State Governor, Sir Dallas Brooks. The inaugural programme included a fireworks display, parade, vintage car display, Henley rowing regatta, river floats including a "Lord Mayor's houseboat", cycling race, tennis at Kooyong, concerts including performances by the Victorian Symphony Orchestra and Royal Philharmonic choir, crowning of the Queen of Moomba and riverside carnival. 25,000 turned out to watch the inaugural Moomba parade down Swanston Street.

A parade (or "procession") and floats through the streets of Melbourne have been a key part of the Moomba festival since its beginning. Each year it attracts over 100,000 people to Melbourne's city centre as well as being shown on free-to-air television in Melbourne.

The first Moomba procession was held in 1955. It was first televised in 1957, the year after the Melbourne 1956 Olympics.

The floats have an annual theme, usually an elaboration on "Let's get together and have fun", the avowed mission and vision statement of Moomba and are usually from sister cities (of which Melbourne has six), schools and community groups. They also promote some aspect of the arts, like singing, dancing, or design. Swanston Street is the traditional home of the floats and spine of the city and horse- or tractor-drawn floats use the tram tracks. Decorated trams are sometimes also featured.

Fireworks are a big part of the Moomba festival and large displays occur on every night of the festival .The fireworks are above the Yarra river.

A traditional carnival including a ferris wheel are held in the Alexandra Gardens along the river bank. In recent years, the carnival has extended to Birrarung Marr across the river. It is popular with children, and dagwood dogs and doughnut stands line the paths.

Moomba particularly celebrates the Yarra River, which has been much maligned during the history of the city until the last few decades. 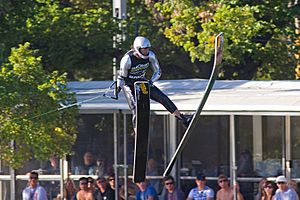 Water skiing in the Yarra was introduced to Moomba in 1959. The tournament has both Junior and Open divisions, with the finals crowning the Moomba Masters Champions on Moomba Monday.

The festival has featured Chinese dragon boats and the Moomba Showboat.

Among the more popular events is the Birdman Rally, begun in 1976,which is traditionally held at the Swan Street bridge over the Yarra River. However it has been held only intermittently during Moomba's history. It was stopped for a number of years due to high levels of E. coli contamination of the Yarra. Subsequent clean-ups reduced pollution to acceptable levels and 2004 saw its return. In 2005 the rally was held in the new inner city park, Birrarung Marr, close to its traditional location. 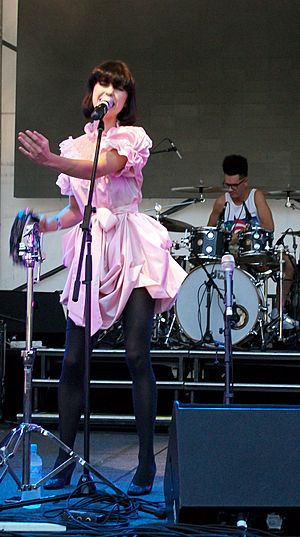 Kimbra performing at Moomba in 2011

Moomba's performers have included international musical acts such as ABBA, Neil Diamond and AC/DC as well as a number of smaller local acts.

All content from Kiddle encyclopedia articles (including the article images and facts) can be freely used under Attribution-ShareAlike license, unless stated otherwise. Cite this article:
Moomba Facts for Kids. Kiddle Encyclopedia.