Newton was known for his collaborations opposite Graham Kennedy and subsequently Don Lane on their respective variety shows as well as appearances with his wife, singer Patti Newton. Their two children are actor Matthew Newton and TV personality Lauren Newton.

Newton started his career in radio broadcasting, primarily as an announcer before becoming a star and fixture of Australian television since its inception in 1956, and was considered both an industry pioneer, icon and one of the longest-serving television performers in the world.

Newton was known for his association with both the Nine Network and Ten Network on numerous shows including In Melbourne Tonight, New Faces, Good Morning Australia, 20 to 1 and Bert's Family Feud.

Newton was born in Fitzroy, an inner suburb of Melbourne, Victoria, to Joseph (Joe) and Gladys Newton. He had three brothers (Tom, Jack and Bob) and two sisters (Alice and Elizabeth). He was educated at St Joseph's Marist Brothers Roman Catholic college. In his early years he had thoughts of entering the priesthood and remained an active Roman Catholic.

Newton's first paid radio appearance was as a schoolboy on Melbourne radio station 3XY on 10 June 1952, doing advertisements dressed as a clown with Doug McKenzie, later to become "Zag" in Zig and Zag.

"... there was a radio program on 3XY Melbourne called Scouting Around, compered by the late Tom Jones. One week the broadcast was recorded at our Scout Hall, and as the direct result of this, I began to appear on 3XY."

This led to regular appearances on a Saturday morning children's show, in which he worked with disc jockey Stan Rofe and McKenzie.

In May 1954, 3XY employed him as a junior announcer (aged 15); by 1955 he was presenting Melbourne Speaks, a vox pop program recorded on the streets of Melbourne's CBD.

After GTV-9 purchased 3AK in April 1961, all GTV-9 personalities were expected to present programs on 3AK. Graham Kennedy and Newton hosted a two-hour morning program.

He began a morning program on 3UZ in 1976. The Herald and Weekly Times Ltd appointed Newton as general manager of 3DB in 1986, which he combined with on-air appearances until 1988.

Newton left HSV-7 and went to GTV-9 in early 1959 to host a daytime television program In Melbourne Today. After appearing in a live commercial on In Melbourne Tonight with his friend Graham Kennedy at Easter 1959, he began to make regular appearances on the show and assumed hosting duties on some episodes. This began a lifelong association with Kennedy.

Newton mainly appeared on the Nine Network in these years. He appeared on:

From mid-1992 until 2005, Newton appeared on Channel Ten as host of Good Morning Australia

In October 2005, Network Ten announced that the program would be cancelled at the end of the year after a 14-year run. Although Newton was offered ongoing employment at Network Ten, he stated that he would return to the Nine Network in 2006.

After finishing on Network Ten's Good Morning Australia in late 2005, Newton returned to the Nine Network in early 2006. He appeared on:

Newton reputedly received a yearly salary of A$800,000 from Nine during this era.

Newton's stage appearances included Professor Marvel/the Wizard of Oz in The Wizard of Oz, Cogsworth in Beauty and the Beast, Franz Liebkind in The Producers and Max in The Sound of Music.

In October 2008, it was announced that Newton would be taking over the role of The Wizard in the Melbourne production of the musical Wicked, after the sudden death of Rob Guest. He played his first performance on 12 November 2008. The production closed on 9 August 2009 and transferred to Sydney from 12 September 2009. Newton continued to play the role on the national tour, which began in January 2011, opposite Lucy Durack as Glinda, Jemma Rix as Elphaba, David Harris as Fiyero and Maggie Kirkpatrick as Madame Morrible. In 2011 he was part of the Australian cast performing Wicked in Singapore. Altogether, Newton had a three-year run in this show.

In July 2012 Newton joined the Melbourne cast of Annie for a few weeks, taking over the role of President Roosevelt from Alan Jones.

In March 2013 it was announced that Newton would be returning to the stage in producer John Frost's production of Grease The Musical which commenced in August 2013. Newton played disc jockey Vince Fontaine.

Newton played the narrator in the 2015 Australian production of The Rocky Horror Show.

Newton appeared in several movies including:

Newton published an autobiography, Bert!: Bert Newton's Own Story, in 1979. 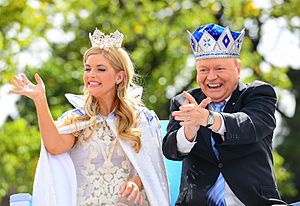 Newton was appointed a Member of the Order of the British Empire in 1979, for his service to the performing arts.

On 12 June 2006, he was made a Member of the Order of Australia "for service to the entertainment industry as a presenter, actor, comedian, and through support for a range of medical research and charitable organisations".

Newton was the first Melbourne-born King of Moomba in 1978.

A song called "For Bert" was written by GTV-9's musical director Brian Rangott. The lyrics include:

In 1997 Newton was the subject of a This Is Your Life tribute. His wife Patti was honoured with her own tribute in 2001.

In 2001 he was awarded the Centenary Medal.

To celebrate the 50th anniversary of television in Australia, Channel 9 ran a show titled 50 Years, 50 Stars, where they looked back at the top 50 stars of Australian television. Newton was listed as the No. 1 Australian TV star of the past 50 years.

On 23 July 2008, Channel 9 marked Newton's 70th birthday with a one-hour special of This Is Your Life hosted by Mike Munro.

In 2018, he was honoured by Australia Post in a series of issued stamps called the Australian Legends series that features stars from Australian television.

Two weeks after his death, on 12 November 2021, Newton was given a Victorian state funeral, conducted at St. Patrick’s Cathedral in Melbourne.

In 1974, Newton married Patti McGrath with whom he worked on television. The Newtons had two children, son Matthew and daughter Lauren. Matthew Newton is an actor who has appeared in a number of Australian films and television dramas. Lauren Newton married swimmer Matt Welsh.

In 1993, a gambling problem led Newton to near bankruptcy and a $1 million debt.

In 2020, Newton was the subject of an episode of Who Do You Think You Are? which focused primarily on his father and maternal grandparents. The episode first aired on 26 May 2020.

In November 2012, Newton underwent quadruple heart bypass surgery, having been admitted to hospital twice in the twelve months prior.

Newton was admitted to Epworth Hospital several times for pneumonia recovery in March and April 2017.

Newton had a toe infection in late 2020 and, due to complications treating this, one of his legs was amputated below the knee in May 2021.

All content from Kiddle encyclopedia articles (including the article images and facts) can be freely used under Attribution-ShareAlike license, unless stated otherwise. Cite this article:
Bert Newton Facts for Kids. Kiddle Encyclopedia.