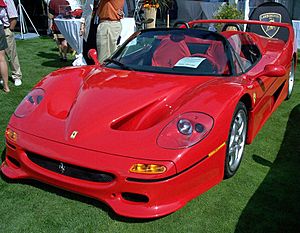 The Ferrari F50 is a sports car made by Ferrari in 1995. It was created to celebrate the company's 50th anniversary. The car has two doors. It is a two-seated convertible with a removable hardtop. It has a 4.7 L V12 engine that was based on the 3.5 L V12 used in the 1992 Ferrari F92A Formula One car.

Only 349 Ferrari F50's were made. This was because Ferrari wanted it to be rare. The last F50 was produced in Maranello, Italy in July 1997.

The Ferrari F50 can travel at over 200 miles per hour.

All content from Kiddle encyclopedia articles (including the article images and facts) can be freely used under Attribution-ShareAlike license, unless stated otherwise. Cite this article:
Ferrari F50 Facts for Kids. Kiddle Encyclopedia.