Coat of arms of Brazil facts for kids 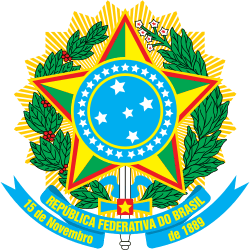 The coat of arms of Brazil was adopted on November 19, 1889, four days after Brazil became a republic.

The coat of arms has the central emblem bordered by coffee (at the left) and tobacco (at the right) branches, which are important crops in Brazil.

In the blue circle in the center, the Southern Cross (Portuguese: Cruzeiro do Sul) can be seen. The ring of 27 stars around it represents Brazil's 26 states and the Federal District.

The blue ribbon has the official name of Brazil (República Federativa do Brasil — Federative Republic of Brazil) in its first line. In the second line, the date of the federative republic's establishment (November 15, 1889) is written.

All content from Kiddle encyclopedia articles (including the article images and facts) can be freely used under Attribution-ShareAlike license, unless stated otherwise. Cite this article:
Coat of arms of Brazil Facts for Kids. Kiddle Encyclopedia.