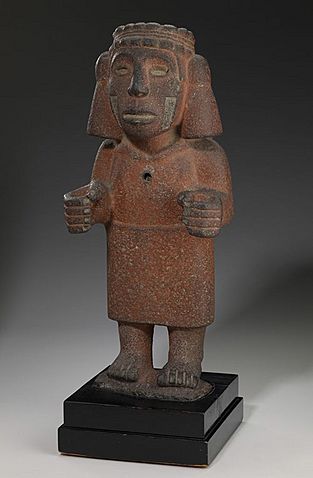 Stone sculpture of Chalchiuhtlicue, Museum of the Americas, Madrid, Spain

Chalchiuitlicue directly translates to "Jade her skirt"; however, her name is most commonly interpreted as "she of the jade skirt." She was also known as Chalchiuhtlatonac (chalchihu[itl]-tla-tona-c) “She Who Shines Like Jade” and Matlalcueye “Possessor of Blue Skirt” by the Tlaxcalans, an indigenous group who inhabited the republic of Tlaxcala. Depending on the text, Chalchiuitlicue was the wife or the sister of the Aztec god of rain, Tlaloc. Tlaloc and Chalchiuitlicue share similar attributes as they are both water deities, however Chalchiuitlicue was often associated with groundwater, unlike Tlaloc.She was also the mother of Tecciztecatl, the Aztec moon god. In other texts, she was Xiuhtecuhtli’s wife, who was a senior deity for the Aztecs.

In Aztec religion, Chalchiuitlicue helps Tlaloc to rule the paradisial kingdom of Tlalocan. Chalchiutlicue brings fertility to crops and is thought to protect women and children.

According to myths, Chalchiuhtlicue once ate the sun and the moon. She is often associated with serpents, as most Aztec water deities are.

Chalchihuitlicue wears a distinctive headdress, which consists of several broad bands, likely cotton, trimmed with amaranth seeds. Large round tassels fall from either side of the headdress. Chalchihuitlicue typically wears a shawl adorned with tassels and a skirt. She is often depicted sitting with a stream of water flowing out of or from behind her skirt. 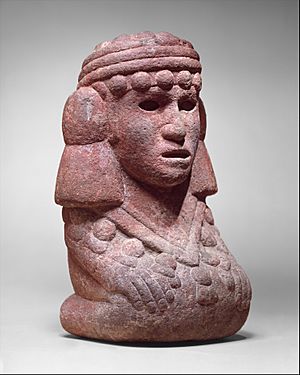 In the Codex Borbonicus (page 5), Chalchihuitlicue wears an elaborate blue and white headdress. She sits on a red stool and a stream of water flows out from the bottom of her stool. A male baby and female baby, who are depicted as if swimming, are carried in the water.

In the Codex Borgia (page 65), Chalchihuitlicue sits on a red throne and a river flows outwards from behind her body. Two figures stand in the water and Chalchihuitlicue gesticulates out towards them. She wears an elaborate yellow headdress. 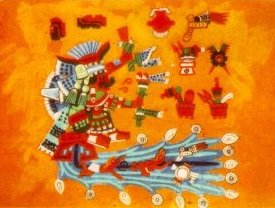 Chalchiuhtlicue as portrayed in one of the Aztec Codices

Five of the twenty big celebrations in the Aztec calendar were dedicated to Chalchiutlicue and her husband (or brother), Tlaloc. During these celebrations, priests dove into a lake and imitated the movements and the croaking of frogs, hoping to bring rain.

Chalchiutlicue presides over the day 5 Serpent and the trecena of 1 Reed. Her feast is celebrated in the ventena of Etzalqualiztli. As she is associated with the fertility of both people and land, the Aztecs asked Chalchiutlicue for a good harvest of crops.

A series of ritualistic ceremonies were performed and dedicated to Chalchiuhtlicue and other childbirth/water deities called Atlcahualo. These ceremonies would last the entire month of February.

As Chalchiutlicue was the guardian of the children and newborns, she played a central role in the process of childbirth. As mothers and babies often died in the process of childbirth, the role of the midwife was also of utmost importance in the process. During labor the midwife would speak to the newborn and ask the gods that the baby's birth ensure a prime place among them. After cutting the umbilical cord, the midwife would wash the new baby with customary greetings to Chalchiutlicue. Four days after the birth, the child was given a second bath and a name.

As reported by Sahagún's informants, the midwife would say, "The gods Ometecutli and Omecioatl who realm in the ninth and tenth heavens, have begotten you in this light and brought you into this world full of calamity and pain take then this water, which will protect you life, in the name of the goddess Chalchiutlicue." She would then sprinkle water at the head of the child and say, "Behold this element without whose assistance no mortal being can survive." She also would sprinkle water on the breast of the baby while saying, "Receive this celestial water that washes impurity from your heart." Then she would go to the head and say, "Son receive this divine water, which must be drank that all may live that it may wash you and wash away all your misfortunes, part of the life since the beginning of the world: this water in truth has a unique power to oppose misfortune." Finally, the midwife would wash the entire body of the baby and say, "In which part of you is unhappiness hidden? Or in which part are you hiding? Leave this child, today, he is born again in the healthful waters in which he has been bathed, as mandated by the will of the god of the sea Chalchiutlicue."

All content from Kiddle encyclopedia articles (including the article images and facts) can be freely used under Attribution-ShareAlike license, unless stated otherwise. Cite this article:
Chalchiuhtlicue Facts for Kids. Kiddle Encyclopedia.