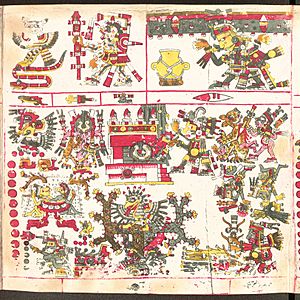 Huitzilopochtli is raising up the skies of the South, one of the four directions of the world, surrounded by their respective trees, temples, patterns and divination symbols.

Aztec mythology is the mythology of the Aztec civilization in Mexico. It was the basis on which they made a working and advanced society. They took some ideas from the Toltec and Mayans to create their advanced culture. Their empire lasted from the 14th century until the Spanish took over.

In their religion they worshipped many gods and goddesses. They even made human sacrifices.

Some gods and goddesses in Aztec mythology are Huitzilopochtli, Chicomecōātl,Tezcatlipoca, and Xochiquetzal.

All content from Kiddle encyclopedia articles (including the article images and facts) can be freely used under Attribution-ShareAlike license, unless stated otherwise. Cite this article:
Aztec mythology Facts for Kids. Kiddle Encyclopedia.