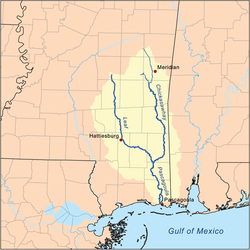 It is significant as the only unaffected (or nearly so) river with a discharge of over 10 cubic kilometres (2.4 cu mi) per year flowing from the United States into the Gulf of Mexico, and indeed the only one in the Cfa Köppen climate classification zone anywhere in the world, with the nearest approaches being the Juquiá and Itajaí in southeastern Brazil (The Yuan Jiang and Shinano Gawa are comparable to those Brazilian rivers but are only marginally in the Cfa zone). As a result, the Pascagoula has, in modern times, been the focus of a great deal of effort regarding its conservation to prevent the construction of dams on it.

The water district manager has proposed the construction of a couple of dams on tributaries called the Big and the Little Cedar creeks to manage the river's flow during a drought crisis. Since 1999 the water level in the river has fallen as low as 1.15 ft (on September 6, 2015) and 0.2 ft (October 8, 2000), as measured at the Graham Ferry gauge.

George and Jackson counties, the two counties closest to the Gulf, have two separate wildlife management areas called Water trails that provide controlled recreation such as camping, birding, or canoeing. 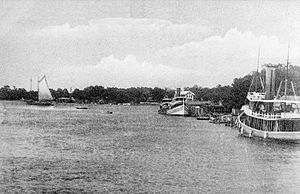 Pascagoula River at Pascagoula, Mississippi, circa 1900

The Pascagoula River is formed in northwestern George County by the confluence of the Leaf and Chickasawhay Rivers and flows generally southward through swampy bottomlands in George and Jackson Counties. In its lower course the river forms several channels and bayous; its largest such distributary is the West Pascagoula River, which flows into the Mississippi Sound at Gautier. The main channel passes Escatawpa and Moss Point and flows into the sound at Pascagoula. At low water the tidal effects are felt more than forty miles upstream.

Pascagoula is a name derived from the Choctaw language meaning "bread people".

According to the Geographic Names Information System, the river has also been known as:

All content from Kiddle encyclopedia articles (including the article images and facts) can be freely used under Attribution-ShareAlike license, unless stated otherwise. Cite this article:
Pascagoula River Facts for Kids. Kiddle Encyclopedia.