Pat Harrison Waterway District (PHWD) is a Mississippi State Agency with headquarters in Hattiesburg. The agency was created in 1962 with a directive of flood control in southeastern and east central Mississippi. 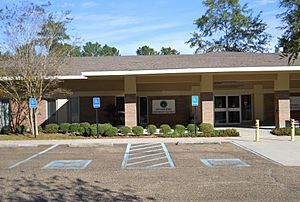 When the Waterway District was created in 1962, its main mission was flood control for rivers and their tributaries along the Pascagoula River Basin in southeastern and east central Mississippi. In addition to flood control, the agency’s mission expanded to include water management and recreation. The District derives its name from Pat Harrison, who served Mississippi as U.S. Representative (1911–19) and Senator (1919-41).

Funding for PHWD comes from ad valorem taxes collected in member Counties, park recreation fees, timber sales, and interest from investments. PHWD is governed by an 18 member Board of Directors, with one Director appointed from each of the 15 member Counties and three Directors appointed by the Governor of Mississippi. Full-time employees are located at the central office in Hattiesburg and at the District’s eight water parks.

Originally, there were 15 Mississippi counties in the Pat Harrison Waterway District: 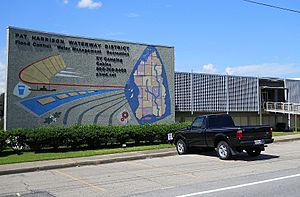 Former Pat Harrison Waterway District Headquarters as it appeared in 2012

As of 2014, three counties (Forrest, Jasper, and Lamar) had withdrawn from the District.

In the summer of 2018, PHWD moved out of their 56-year-old office building located at 6081 U.S. Route 49 south, as part of a lawsuit settlement with Forrest County. In September 2018, Forrest County Board of Supervisors ordered the demolition of the county-owned building, including its distinctive mural on the front facade, to facilitate future road construction near Forrest General Hospital.

Water resources in the Pascagoula River Basin, over which Pat Harrison Waterway District has jurisdiction, include:

Little Black Creek Water Park (Lumberton, MS) was formerly managed by PHWD, but was leased to a private developer in 2013.

All content from Kiddle encyclopedia articles (including the article images and facts) can be freely used under Attribution-ShareAlike license, unless stated otherwise. Cite this article:
Pat Harrison Waterway District Facts for Kids. Kiddle Encyclopedia.