Stone County is a county located in the U.S. state of Mississippi. As of the 2010 census, the population was 17,786. Its county seat is Wiggins. Stone County was formed from the northern portion of Harrison County on June 5, 1916. The county was named for John M. Stone, who served as Governor of Mississippi from 1876 to 1882 and again from 1890 to 1896.

31.5% of households had children under the age of 18 living with them, 54.5% were married couples living together, 14.4% had a female householder with no husband present, 4.7% had a male household with no wife present, and 26.4% were non-families. 22.5% of all households were made up of individuals and 8.6% had someone living alone who was 65 years of age or older. The average household size was 2.68 and the average family size was 3.13. 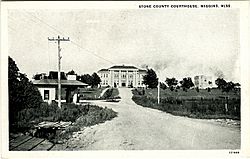 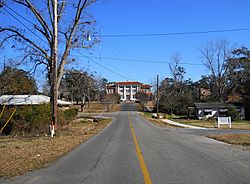 On April 25, during the 2012 regular session of the Mississippi Legislature, Concurrent Resolution 643 was adopted by the state Senate and state House of Representatives, stating that Stone County be named and declared the Mural County of Mississippi. During the previous 8 years, a Telling Trees Project was developed in Stone County to document and celebrate Stone County's history and heritage. As part of that project, 23 murals, in the form of paintings and mosaic tiles, were created in cooperation with the Art Department, Perkinston campus of Mississippi Gulf Coast Community College and are on public display throughout the county. The murals tell visual stories of Stone County's ecosystems, people, landmarks, and industries.

All content from Kiddle encyclopedia articles (including the article images and facts) can be freely used under Attribution-ShareAlike license, unless stated otherwise. Cite this article:
Stone County, Mississippi Facts for Kids. Kiddle Encyclopedia.