Wiggins is a city in Stone County, Mississippi, United States. It is part of the Gulfport–Biloxi, Mississippi Metropolitan Statistical Area. The population was 4,390 at the 2010 census. It is the county seat of Stone County.

Wiggins, MS business district and railroad depot before the 1910 fire

Wiggins is named after Wiggins Hatten, the father of Madison Hatten, one of the area's original homesteaders. It was incorporated in 1904, and the 1910 census reported 980 residents. In the early 1900s, Wiggins prospered along with the booming timber industry. Wiggins was once headquarters of the Finkbine Lumber Company.

On January 21, 1910, between the hours of 11 am and 1 pm, more than half of the Wiggins business district was destroyed by fire. The fire started from unknown origin in the Hammock Building, a lodging house, and spread rapidly because of strong winds from the northwest. With no city fire department or waterworks, the residents of Wiggins resorted to bucket brigades and dynamite to stop the fire, which was confined to the east side of the Gulf and Ship Island Railroad. The fire consumed 41 business establishments, including the Gulf and Ship Island Railroad depot. Only two or three residential dwellings were destroyed, because most homes were built away from the business district. 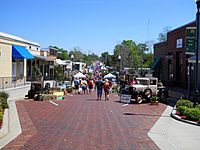 After the 1910 fire and until the 1960s, the center of commerce for Wiggins developed on both sides of Pine Avenue, that sloped downhill and eastward, perpendicular to U.S. Route 49 and Railroad Street (First Street), over a distance of one city block. Small shops were built mainly of brick and were mostly contiguous to each other. Over the years, the shops were occupied by numerous businesses that included drug stores, law offices, a grocery store, a shoe store, a dry cleaners, 5 & dime stores, auto supply store, barber shops, cafes, a movie theater, dry goods outlet, feed & seed outlet, an army surplus store, beauty salons, clothing stores, gift shops, County Library, and U.S. Post Office. In more recent years, the shops have served as real estate offices, CPA & tax preparer outlets, an antique store, newspaper office, ice cream shop, art & frame shop, food outlets, and stationery shop.

In the late 1960s, U.S. Route 49 bypassed the downtown area, and many businesses moved from Pine Hill to other locations within Wiggins. The old Wiggins High School and Elementary School buildings occupied a city block, situated at the base of Pine Hill. When the school buildings were demolished in the 1970s, the school land was dedicated to City use as Blaylock Park. In the 1980s, city and county business leaders saw a need for developing a sense of community and tourism by initiating an annual Pine Hill Day, which later became Pine Hill Festival. During Pine Hill Day, area residents offered items for sale as arts & crafts, in farmers' markets, and as local cuisine. To attract more visitors, other venues such as live music entertainment, competitive foot races, antique vehicle displays, commercial food vendors, and games for kids were added through the years, and the festival became a Spring event. In 2014, an estimated 15,000 people attended the 2-day festival. 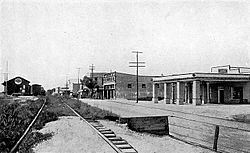 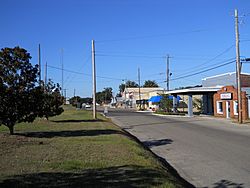 There were 1,380 households out of which 36.4% had children under the age of 18 living with them, 47.6% were married couples living together, 21.3% had a female householder with no husband present, and 27.5% were non-families. 23.5% of all households were made up of individuals and 12.5% had someone living alone who was 65 years of age or older. The average household size was 2.66 and the average family size was 3.12.

All content from Kiddle encyclopedia articles (including the article images and facts) can be freely used under Attribution-ShareAlike license, unless stated otherwise. Cite this article:
Wiggins, Mississippi Facts for Kids. Kiddle Encyclopedia.