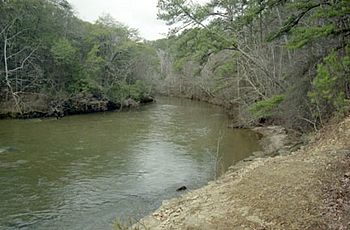 The Chunky River is a short tributary of the Chickasawhay River in east-central Mississippi. Via the Chickasawhay, it is part of the watershed of the Pascagoula River, which flows into the Gulf of Mexico.

The river is formed between the towns of Hickory and Chunky in southwestern Newton County by the confluence of Chunky Creek and Okahatta Creek. However, older maps continue to call it the Chunky Creek until a point in Lauderdale County. The Chunky River flows generally southeastwardly through southwestern Lauderdale County and northwestern Clarke County, where it joins Okatibbee Creek to form the Chickasawhay River near the town of Enterprise.

Dunns Falls Water Park is a state park located along the river north of Enterprise.

Chunky is a name derived from the Choctaw language most likely meaning martin (bird).

All content from Kiddle encyclopedia articles (including the article images and facts) can be freely used under Attribution-ShareAlike license, unless stated otherwise. Cite this article:
Chunky River Facts for Kids. Kiddle Encyclopedia.