Chunky is a town in Newton County, Mississippi, United States. The population was 344 at the 2000 census.

The community was named after the nearby Chunky River.

Chunky is located along the Chunky River.

According to the United States Census Bureau, the town has a total area of 0.8 square miles (2.1 km2), all land.

There were 120 households out of which 37.5% had children under the age of 18 living with them, 65.8% were married couples living together, 10.0% had a female householder with no husband present, and 20.8% were non-families. 18.3% of all households were made up of individuals and 11.7% had someone living alone who was 65 years of age or older. The average household size was 2.87 and the average family size was 3.28.

For the youth, there is a baseball field. There is also a swimming pool association. 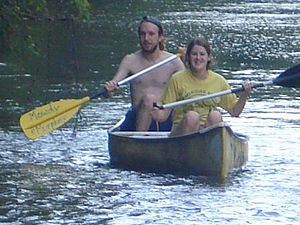 Recreational canoeing on the Chunky River 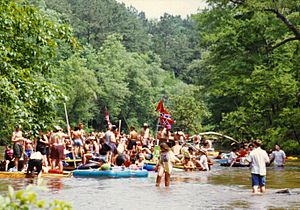 The Chunky River is a tourist attraction. The river forms from the confluence of two creeks a few miles west of the town. The Chunky River has little development along its shores, and is used for canoeing and kayaking. While the river is shallow, occasionally, there are sections where the paddle will not reach the bottom. One such section is known as the "Deep Eddy". Otherwise, the river is seldom deeper than a few feet, and where there are mild rapids, the river may only be a few inches in depth. There is a public landing east of town on the Highway 80 bridge, and another public landing 0.5 mi (0.80 km) farther east, at another Highway 80 bridge. This section of river is known as the "Seven Mile Bend", although it is approximately 3 mi (4.8 km) in length. The ease of accessibility makes this area the most used section of the river.

All content from Kiddle encyclopedia articles (including the article images and facts) can be freely used under Attribution-ShareAlike license, unless stated otherwise. Cite this article:
Chunky, Mississippi Facts for Kids. Kiddle Encyclopedia.