The Chickasawhay River is a river, about 210 miles (340 km) long, in southeastern Mississippi in the United States. It is a principal tributary of the Pascagoula River, which flows to the Gulf of Mexico. The Chickasawhay's tributaries also drain a portion of western Alabama. The name "Chickasawhay" comes from the Choctaw word chikashsha-ahi, literally "Chickasaw potato". 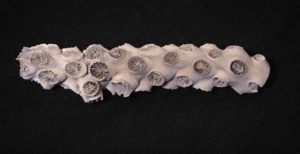 The Chickasawhay River is known for its abundance of fossil deposits, placed over a period of 35 million years. Dr. Mark Puckett, Chairman of the Department of Geography and Geology at the University of Southern Mississippi, has studied the area for years. According to Pucket, many species of fossils from the river were the first of their kind to be studied anywhere on earth. Some sealife fossils that are now found worldwide, were first discovered in deposits along this river, from a period when it was part of the sea. Some species are named for local towns and landmarks.

The Chickasawhay is formed by the confluence of the Chunky River and Okatibbee Creek, where Enterprise developed in northwestern Clarke County, and it flows generally southward through present-day Clarke, Wayne and Greene counties into northern George County, where it meets the Leaf River to form the Pascagoula River. The Chickasawhay flows past the towns of Stonewall, Quitman, Shubuta, Waynesboro, and Leakesville. Shubuta, like many other towns along the rivers, was developed by European Americans from a trading post near an indigenous Choctaw village.

All content from Kiddle encyclopedia articles (including the article images and facts) can be freely used under Attribution-ShareAlike license, unless stated otherwise. Cite this article:
Chickasawhay River Facts for Kids. Kiddle Encyclopedia.