The current mayor of the city is Steve Demetropoulos. 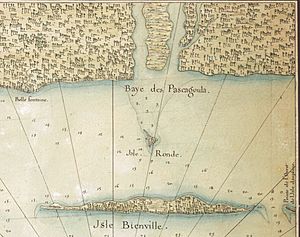 The name Pascagoula, which means "bread eater", is taken from a group of Native Americans found in villages along the Pascagoula River some distance above its mouth. Hernando De Soto seems to have made first contact with them in the 1540s, though little is known of that encounter. Pierre Le Moyne d'Iberville, founder of the colony of Louisiana, left a more detailed account from an expedition of this region in 1700. The first detailed account comes from Jean-Baptiste Le Moyne de Bienville, younger brother of Iberville, whom the Pascagoula visited at Fort Maurepas in present-day Ocean Springs, shortly after it was settled and while the older brother was away in France. There are few details that are certain about these peoples, except that their language seemed not to have shared an etymological root with the larger native groups to the north, the Choctaw particularly. Instead, their language seems more akin to that of the Biloxi or Natchez people, both of whom have been linked in this way to the Sioux, Crow, and Ho-Chunk. The territory of the Biloxi peoples seems to have ranged from the areas of what are now called Biloxi Bay to Bayou La Batre (Alabama) and twenty-five miles up the Pascagoula River, and then the Pascagoula people's territory seems to have ranged between some distance north of there to the confluence of the Leaf and Chickasawhay rivers.

Local legend says the Pascagoula tribe chanted and waded hand-in-hand into the Pascagoula River, drowning together rather than become enslaved to or killed by an enemy tribe, the Biloxi. Thus, the legend of the "Singing River" was born. It is said that on still summer and autumn evenings, the sad song of the Pascagoulas can still be heard near the river. 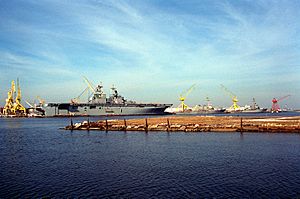 The region changed hands over the next century, being occupied variously by the English, French, and Spanish until well after the American Revolutionary War. It did not come into the permanent possession of the United States until 1812, when it was added to the Mississippi Territory. At one point, for seventy-four days in 1810, Pascagoula was a part of what was known as The Republic of West Florida. Pascagoula was incorporated as a village in 1892 and obtained city status in 1901. Today's downtown Pascagoula used to be the town of Scranton, Mississippi (incorporated in 1870) until the two towns merged in 1912.

Pascagoula has been home or host to many notable people, including the pirate Jean Lafitte; the infamous Copeland Gang; “Old Hickory” Andrew Jackson; General (later President) Zachary Taylor; Confederate General and Congressman David Emanuel Twiggs; Union Admiral David Farragut; Henry Wadsworth Longfellow, who is said to have penned "The Building of a Ship" while in Pascagoula (although his stay is more local folklore than truth); and Nobel Laureate in literature William Faulkner who is believed to have written "Mosquitoes" while summering in Pascagoula.

Pascagoula gained notoriety on October 11, 1973 when two local fishermen, Charles Hickson and Calvin Parker, claimed to have been abducted by aliens from a Pascagoula pier. The media frenzy that followed touched off national interest in UFOs and extraterrestrials unparalleled since the Roswell incident. In 1983, Hickson wrote a book about his ordeal entitled UFO Contact In Pascagoula.

Pascagoula also gained national attention in the 1980s, when novelty singer/songwriter Ray Stevens featured the town in his hit, "Mississippi Squirrel Revival." Stevens admits, though, that the song could have been set in any Southern town but the name Pascagoula easily rhymed with the word, hallelujah, which is heard frequently in the song.

This is also the spot where a little girl was found thrown into the Dog River on Dec. 5, 1982. The girl, thought to be between 18 months and two years old, has never been identified to this day. The unidentified toddler is buried in Jackson County Memorial Park. Deputy Moore and his wife stepped forward and made sure the little girl was given a proper funeral and burial in 1982. Approximately 200 people attended the young girl's funeral. 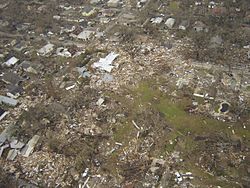 On August 29, 2005, Hurricane Katrina's 20-foot (6.1 m) storm surge devastated Pascagoula, much like Biloxi and Gulfport and the rest of the Mississippi Gulf Coast. Katrina came ashore during the high tide of 6:12AM, 2.1 ft (0.64 m) more. Nearly 92% of Pascagoula was flooded. Most homes along Beach Boulevard were destroyed, and FEMA trailers are now an omnipresent sight. Due to the major media focus on the plight of New Orleans and Biloxi-Gulfport in the aftermath of Katrina, many Pascagoula citizens have expressed feeling neglected or even forgotten following the storm. Most Pascagoula residents did not possess flood insurance, and many were required to put their homes on pilings before being given a permit to rebuild. Additionally, TITANTubes (sometimes referred to as geotubes) were installed under the beach to serve as low profile dune cores to protect the evacuation route.

United States Navy officials announced that two Arleigh Burke-class guided missile destroyers that were under construction at Northrop Grumman Ship Systems in Pascagoula had been damaged by the storm, as well as the Amphibious assault ship USS Makin Island.

The United States post office in Pasagoula contains a mural, Legend of the Singing River, painted in 1939 by Lorin Thompson. Murals were produced from 1934 to 1943 in the United States through the Section of Painting and Sculpture, later called the Section of Fine Arts, of the Treasury Department. The mural was restored in the 1960s as the building became the Pasagoula Public Library. The building was damaged by Hurricane Katrina in 2005 and the mural was placed in storage. In 2010, it was re-installed at the new Pascagoula post office on Jackson Avenue. 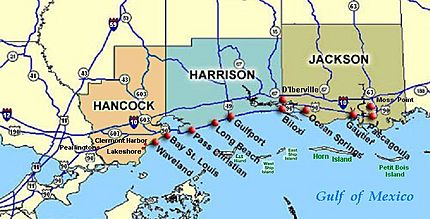 Pascagoula, Mississippi (right edge) is east of Gautier and south of Moss Point, along the Gulf of Mexico.

In the 2004 film The Ladykillers, lead character Mrs. Munson mentions that her neighbor went down and bought a new stereo "at the Costco in Pascagoula".

Pascagoula appears in the video game Tom Clancy's EndWar as a possible battlefield. In the game, it became a key American oil refinery in 2016.

Pascagoula is a major industrial city of Mississippi, on the Gulf Coast. Prior to World War II, the town was a sleepy fishing village of about 5,000. The population skyrocketed with the war-driven shipbuilding industry. Although the city's population seemed to peak in the late 1970s and early 1980s as Cold War defense spending was at its height, Pascagoula experienced some new growth and development in the years before Hurricane Katrina. Today, Pascagoula is home to the state's largest private, single-site employer, Ingalls Shipbuilding, owned by Huntington Ingalls Industries. Other major industries include the largest Chevron refinery in the world; Rolls Royce Naval Marine specializing in U.S. Navy ship propulsion; and First Chemical/Chemours.

All content from Kiddle encyclopedia articles (including the article images and facts) can be freely used under Attribution-ShareAlike license, unless stated otherwise. Cite this article:
Pascagoula, Mississippi Facts for Kids. Kiddle Encyclopedia.