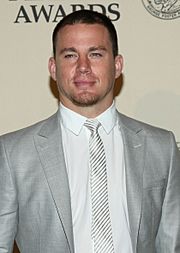 Channing Matthew Tatum (born April 26, 1980) is an American actor. Tatum made his film debut in the drama film Coach Carter (2005). His breakthrough role was in the 2006 dance film Step Up, which introduced him to a wider audience. He is known for his portrayal of the character Duke in the 2009 action film G.I. Joe: The Rise of Cobra and its 2013 sequel G.I. Joe: Retaliation. Although both G.I. Joe films received negative reviews from critics, they were commercially successful, grossing more than $300 million at the box office.

In 2006, Tatum met actress Jenna Dewan on the set of their movie Step Up; they married on July 11, 2009, at Church Estates Vineyards in Malibu, California. They have a daughter who was born in London in 2013.

All content from Kiddle encyclopedia articles (including the article images and facts) can be freely used under Attribution-ShareAlike license, unless stated otherwise. Cite this article:
Channing Tatum Facts for Kids. Kiddle Encyclopedia.