Jenna Lee Dewan (born December 3, 1980) is an American actress, businesswoman and dancer. She started her career as a backup dancer for Janet Jackson, and later worked with artists including Pink, Missy Elliott, and Christina Aguilera.

She is known for her role as Nora Clark in the 2006 film Step Up. She has also starred on the FX series American Horror Story. She portrayed Freya Beauchamp on the Lifetime series Witches of East End and as of 2016 was playing the recurring role of Lucy Lane in Supergirl. 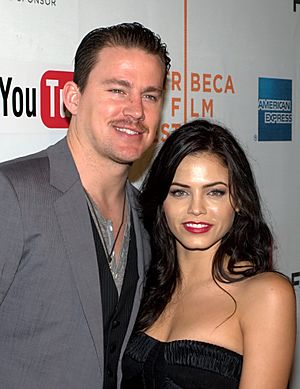 Dewan with husband Channing Tatum in 2010

In 2005, Dewan met actor Channing Tatum on the set of their film Step Up. They began dating shortly after filming had finished. The couple became engaged in early September 2008, and married in 2009 in Malibu, California. Their daughter was born in 2013. On April 2, 2018, after nine years of marriage, the couple announced that they were separating.

Dewan is an animal rights activist and a vegan. Dewan is raising her daughter as a vegetarian but says she will let her decide what to eat when she is old enough.

All content from Kiddle encyclopedia articles (including the article images and facts) can be freely used under Attribution-ShareAlike license, unless stated otherwise. Cite this article:
Jenna Dewan Facts for Kids. Kiddle Encyclopedia.