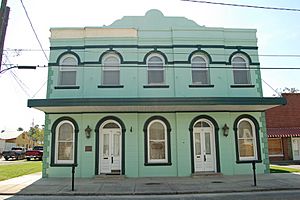 The Bank of Lockport is listed on the National Register of Historic Places.

Lockport is a town on Bayou Lafourche in Lafourche Parish, Louisiana, United States. The population was 2,624 at the 2000 census. It is part of the Houma–Bayou Cane–Thibodaux Metropolitan Statistical Area.

Lockport, founded in 1835, traces its history to Jacques Lamotte, who in 1790 owned a large tract of land along Bayou Lafourche. Lemotte sold a portion of the tract to Messrs. Mercier and Marcantel in 1814. In 1823 William Field purchased a parcel of the land and later donated 5 arpents of it on both banks of Bayou Lafourche to Barataria and Lafourche Canal Company. As part of the transaction, the company agreed to build a canal, which would link Bayou Terrebonne to New Orleans. Allou D'Hemecourt surveyed the area in 1835. His map bears the name Longueville. Eventually, the village's name would become Lockport.

At first the canal, completed in 1847, brought prosperity to the area. Three years later locks were completed at the point where the canal reached Bayou Lafourche. Shipping along the canal was brisk until 1868. After that time, part of the waterway was no longer in use. The crevasse of 1876 partially destroyed the locks. Today remnants of the brick bulwark are still visible under a blanket of weeds.

Lockport prospered in spite of the canal's failure as a business venture. In 1849 the first public school opened. It was a one-room affair in Scanian's Cooperage. In 1850 Holy Savior Catholic Church was dedicated, and in 1879 an order of nuns established Holy Savoir School.

The Village of Lockport was incorporated in 1899, and a mayor and board of aldermen were named. At the turn of the century, the village boasted a post office, brick sidewalks, an iron bridge over the bayou, a newspaper, ice house, banks, hotels, liveries, blacksmith shop, clothing stores, grocery and general merchandise stores, and various other enterprises. The iron bridge created quite a stir among the populace. It joined Lockport to Rita, the settlement on the east bank of the bayou.

One of the worst calamities to touch the village occurred in 1916, when a disastrous fire destroyed a large part of the business area and several homes. As a result of this tragedy, a water tower was erected on Main Street near the present day Sheriff's Annex, where it stood until Hurricane Betsy destroyed it in 1965. By 1948 Lockport's population had grown to the point where its status was changed from village to town. Its boundaries had been expanded, and later the site of the canal bridge was changed to fifth street, now Crescent Avenue. Highway 1 no longer ran along Main Street. Several businesses sprang up along the new route, and that area has become the business hub of the town. Today Lockport is a progressive community, dependent upon a diversified economy, surrounded by industries such as shipbuilding, sugarcane farming, oil and gas exploration, cattle, fishing, and a variety of vegetable farms. Through the years Lockport has managed to retain its small town quality - a quality that welcomes visitors who travel along Bayou Lafourche, the longest street in the world

There were 1,009 households out of which 34.5% had children under the age of 18 living with them, 56.3% were married couples living together, 10.4% had a female householder with no husband present, and 28.2% were non-families. 24.1% of all households were made up of individuals and 12.9% had someone living alone who was 65 years of age or older. The average household size was 2.59 and the average family size was 3.06.

All content from Kiddle encyclopedia articles (including the article images and facts) can be freely used under Attribution-ShareAlike license, unless stated otherwise. Cite this article:
Lockport, Louisiana Facts for Kids. Kiddle Encyclopedia.