Golden Meadow French: Canal Yankee is a town along Bayou Lafourche in Lafourche Parish, Louisiana, United States. The population was 2,101 at the 2010 census. It is part of the Houma–Bayou Cane–Thibodaux Metropolitan Statistical Area. Its main source of revenue is the oil and gas industry. The fishing and seafood industries also have strong economic impacts, with charter fishing, restaurants, and lodging actively serving patrons. The town was once known as a speed trap, but it has since been bypassed by Hwy 3235 and city traffic has been reduced to mostly locals. As in other places in Louisiana, there is a noticeable presence of Cajun culture, music, and cuisine.

The Golden Meadow name was given by the original land grant owners, Benjamin and Louisa Hobbs Barker of Illinois. In 1839, they named it so because of the yellow flowers growing everywhere. They hoped to become wealthy selling lots to French and English settlers, but abandoned the plan.

There were 821 households, out of which 35.4% had children under the age of 18 living with them, 57.7% were married couples living together, 9.9% had a female householder with no husband present, and 28.9% were non-families. 22.8% of all households were made up of individuals, and 11.9% had someone living alone who was 65 years of age or older. The average household size was 2.67 and the average family size was 3.16. 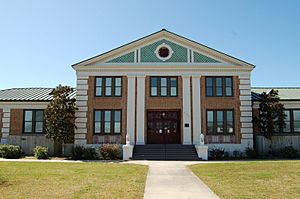 South Lafourche High School is in the Galliano census-designated place, north of Golden Meadow, and serves the community.

All content from Kiddle encyclopedia articles (including the article images and facts) can be freely used under Attribution-ShareAlike license, unless stated otherwise. Cite this article:
Golden Meadow, Louisiana Facts for Kids. Kiddle Encyclopedia.