A four-mile-long (6.4 km) historic section of Highway 51 remains in Clark County, and is listed on the National Register of Historic Places.

Both segments are low-traffic, two-lane, undivided roads winding through the Piney Woods of Southwest Arkansas. No segment of Highway 51 has been listed as part of the National Highway System, a network of roads important to the nation's economy, defense, and mobility.

The ArDOT maintains Highway 51 like all other parts of the state highway system. As a part of these responsibilities, the department tracks the volume of traffic using its roads in surveys using a metric called average annual daily traffic (AADT). ArDOT estimates the traffic level for a segment of roadway for any average day of the year in these surveys.

Highway 51 begins at Highway 53 in southern Clark County, just north of Whelen Springs and the Little Missouri River. The highway runs within the Arkansas Timberlands of Southwest Arkansas, a two-lane, undivided road except for a few miles within Arkadelphia. 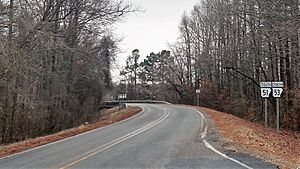 The route runs west through sparsely populated pine forest, curving northward after Sycamore and crossing McNeeley Creek twice. Highway 51 crosses the Union Pacific Railroad tracks and a former alignment near Beirne, a small mill town. North of Beirne, Highway 51 begins a wrong-way concurrency with US Highway 67 (US 67). Less than two miles from the Nevada County line, Highway 51 turns north from the concurrency. Highway 51 intersects Interstate 30 (I-30) at a diamond interchange, then continues north through Burtsell. The highway begins paralleling the Caddo Valley Railroad and South Fork Terre Noir Creek, before crossing both shortly after entering the city limits of Okolona. In Okolona, the route passes the historic Okolona Colored High School Gymnasium, listed on the National Register of Historic Places (NRHP) before an intersection with Highway 182. Highway 51 exits the town to the northeast, briefly overlapping Highway 53 to cross Terre Noir Creek near Holly Grove. Highway 51 turns east to Arkadelphia, passing the Terre Noire Natural Area, which contains blackland prairies and woodland complexes. Highway 51 serves as the eastern terminus of Highway 26 and passes the Bozeman House before entering the city limits. 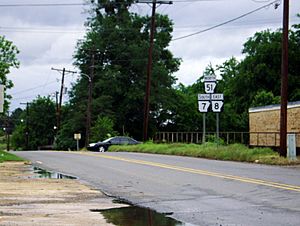 Highway 7, 8, and 51 reassurance markers in Arkadelphia

In Arkadelphia, Highway 51 becomes Hollywood Road and passes Magnolia Manor before an intersection with Highway 8. The two routes begin a concurrency running east, crossing I-30 at a diamond interchange. Highway 8/Highway 51 enter Arkadelphia as Pine Street, serving a mix of commercial and residential land uses before intersecting US 67 and Highway 7 (Tenth Street). The four highways overlap southbound as Tenth Street for two blocks, before turning onto Caddo Street and heading east toward downtown Arkadelphia, passing the historic Clark County Library. At an intersection with Sixth Street, US 67 turns south toward the Arkadelphia Commercial Historic District, and the three state highways continue east to cross the Ouachita River on the Ouachita River Bridge. Shortly after the bridge, Highway 7 and Highway 8 split south toward Griffithtown.

Highway 51 runs east to Joan, where it intersects Highway 128. The highway turns north, entering Hot Spring County. It passes through Brown Springs before serving as the western terminus of Highway 222 east of Donaldson. Highway 51 passes through the small town of Donaldson as Bryant Drive before an intersection with US 67, where it terminates.

Except for the areas around Arkadelphia, traffic counts in 2016 show much of Highway 51 is classified as a very low volume local road by American Association of State Highway and Transportation Officials (AASHTO), meaning fewer than 400 vehicles per day.

A second segment of Highway 51 begins at US 270 on the municipal boundary between Rockport and Malvern. It runs north through the small town of Rockport before turning westward toward Butterfield and Magnet Cove. West of Magnet Cove, the highway terminates at US 270. AADT for the highway was highest near Rockport, with 3,200 vehicles per day. Near the western terminus, the traffic counts dropped to 1,400.

Highway 51 was created during the 1926 Arkansas state highway numbering as a route between US 67 and Arkadelphia in Clark County. 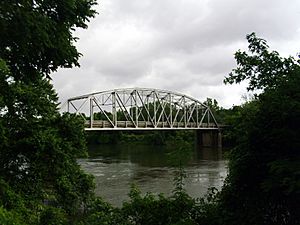 Bridge that formerly carried Highway 51 over the Ouachita River

Near Berine, a former alignment now bears the Clark County Road 12 designation. Along the former alignment, the McNeely Creek Bridge is listed on the National Register of Historic Places. To the east of Arkadelphia, Highway 51 formerly crossed the Ouachita River on a historic truss bridge. The bridge was closed to vehicular traffic in 2018 upon the opening of a new bridge.

Between Curtis and Gum Springs, a four-mile-long (6.4 km) stretch of concrete pavement built in 1931 remains intact. Part of the original Highway 51 alignment between Little Rock with Texarkana, the pavement was used until the present section of US 67 was built in 1965. The road section was listed on the National Register of Historic Places in 2004.

All content from Kiddle encyclopedia articles (including the article images and facts) can be freely used under Attribution-ShareAlike license, unless stated otherwise. Cite this article:
Arkansas Highway 51 Facts for Kids. Kiddle Encyclopedia.