Gurdon is a city in Clark County, Arkansas, United States. The population was 2,212 at the 2010 census. 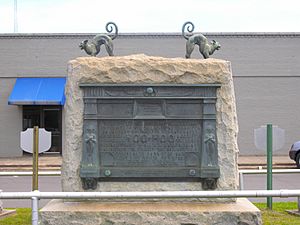 Hoo Hoo Cats on a monument dedicated to the Concatenated Order of Hoo-Hoo in Gurdon; listed on National Register of Historic Places, April 2009

Hoo Hoo Cats on a monument dedicated to the Concatenated Order of Hoo-Hoo in Gurdon; listed on National Register of Historic Places

The town was founded in the late nineteenth century as a railroad town for the timber industry on the St. Louis, Iron Mountain and Southern Railway (now the Union Pacific Railroad). Originally settled in 1873, the city was incorporated in 1880. The town's name derives from railroad executive Henry Gurdon Marquand's middle name.

Gurdon is the birthplace of the Concatenated Order of Hoo-Hoo, in 1892.

The town is known for the presence of the "Gurdon Light", a series of unexplained phenomena which occur in a wooded area by railroad tracks, which appears to viewers as a light or lights hovering in mid-air. Local folk legend explains the light appearances as a deceased railwayman's lantern. Scientific work on the origin of the lights has proven inconclusive. The light has been featured on local media and on the TV show Unsolved Mysteries.

Elementary and secondary education is provided by the Gurdon School District, which leads students to graduate from Gurdon High School. The school's mascot is the Go-Devil with purple and gold as the school colors.

Gurdon is supported by the Cabe Public Library, which is a branch library of the Clark County Library System. 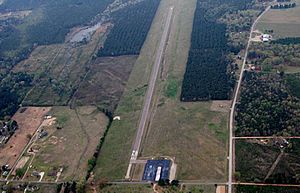 All content from Kiddle encyclopedia articles (including the article images and facts) can be freely used under Attribution-ShareAlike license, unless stated otherwise. Cite this article:
Gurdon, Arkansas Facts for Kids. Kiddle Encyclopedia.