Kids Encyclopedia Facts
Not to be confused with Franklin, Louisiana. 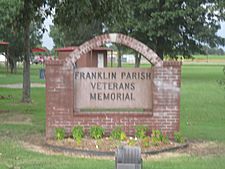 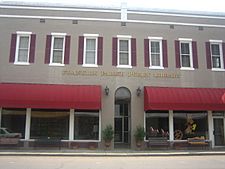 Franklin Parish (French: Paroisse de Franklin) is a parish located in the northeastern part of the U.S. state of Louisiana. As of the 2010 census, the population was 20,767. The parish seat is Winnsboro. The parish was founded in 1843 and named for Benjamin Franklin.

921st Engineer Company (Horizontal) part of the 528th Engineer Battalion which belongs to the 225th Engineer Brigade is located in Winnsboro. 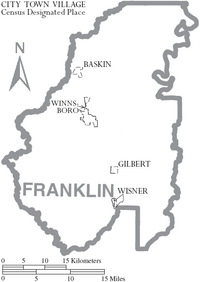 The superintendent is John Gullatt.

The parish also hosts two private Christian schools, Franklin Academy in Winnsboro, where Phil Jackson and Leigh Jonson are principal and vice-principal, respectively, and Family Community Christian School, of which Elizabeth Rigdon is the principal.

All content from Kiddle encyclopedia articles (including the article images and facts) can be freely used under Attribution-ShareAlike license, unless stated otherwise. Cite this article:
Franklin Parish, Louisiana Facts for Kids. Kiddle Encyclopedia.