Richland Parish is a parish located in the North Louisiana Delta Country in the U.S. state of Louisiana, known for its fertile, flat farmland, cane brakes, and open spaces. The name Richland was chosen due to the rich production from farming. The parish seat and largest community is Rayville.

Richland Parish is home to the first parishwide public library in the State of Louisiana. The library was built in 1925 by the Lambda Kappa Club of Rayville. R.R. Rhymes donated the original building in memory of his wife, Nonnie Roark Rhymes. In 2008, Governor Bobby Jindal appointed Bibb Ingram, a granddaughter to Nonnie Rhymes, as a member of the Louisiana State Library Board. 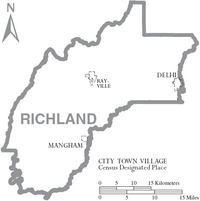 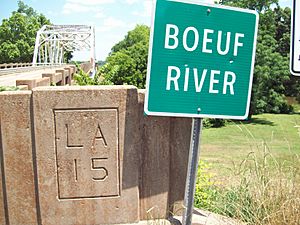 Bridge crossing the Boeuf River on Hwy 15 near Alto, LA

All content from Kiddle encyclopedia articles (including the article images and facts) can be freely used under Attribution-ShareAlike license, unless stated otherwise. Cite this article:
Richland Parish, Louisiana Facts for Kids. Kiddle Encyclopedia.