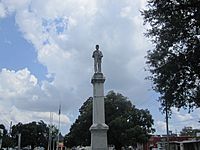 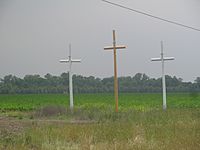 Madison Parish (French: Paroisse de Madison) is a parish located in the U.S. state of Louisiana. As of the 2010 census, the population was 12,093. Its parish seat is Tallulah. The parish was formed in 1839.

Madison Parish was the home to many succeeding Native American groups in the thousands of years before European settlements began. Peoples of the Marksville culture, Troyville culture, Coles Creek culture and Plaquemine culture built villages and mound sites throughout the area. Notable examples include the Fitzhugh Mounds and the Raffman Site.

The parish is named for former U.S. President James Madison. Furthermore in Madison's honor, the parish courthouse is built in the colonial Virginia style of architecture though, as with many other Louisiana communities, the structure sits in the center of the immediate downtown area. It faces east. Nearby is the Tallulah City Hall, which faces south.

During the American Civil War, Madison Parish, then a rich cotton area, sent many of its men into battle early in the war. In 1862, it paid $80 to anyone joining one of her Confederate military companies. When Governor Thomas Overton Moore saw that New Orleans would fall to the Union, he issued orders for the destruction of cotton to keep it from Federal hands. Hence hundreds of thousands of dollars worth of cotton were burned as the planters sadly looked on. Governor Moore asked Brig. Gen. R. B. Todd, who commanded the Eleventh Brigade in northeast Louisiana to call into active service his own militia and all men between eighteen and forty who were not subject to conscription. These men from Madison, Carroll, and Tensas parishes were to cooperate with Confederate authorities to help repel Federal attacks in the area.

Toward the end of the war, Madison Parish faced problems with jayhawkers sympathetic to the Union, who according to historian Winters, "were holed up in the impenetrable cane and cypress swamps in the area. This band, made up of draft dodgers, deserters, and runaway Negroes, often left the swamps to rob, kill, or capture anyone who passed by on the road." The Confederates dressed in Federal uniforms to trick the jayhawkers. Winters continues: "The leader of the desperadoes, a huge black, welcomed the supposed Federal troops. Suddenly the [Confederate] disguised men fell upon the surprised gang and began to slaughter them. [In] a quick but bloody struggle [the Confederates] killed 130 of the group. The few who escaped never again returned to ravage the area."

The Sevier family dominated Madison Parish politics for more than a century. The Seviers claim descent from John Sevier, a fighter in the American Revolution, governor of Tennessee, and namesake of Sevierville and Sevier County in eastern Tennessee. Among the political Seviers were Louisiana State Senator Andrew L. Sevier, who served from 1932 until his death in 1962, and State Representative Henry Clay "Happy" Sevier, Sr., whose tenure extended from 1936 to 1952. William Putnam "Buck" Sevier, Jr., was a banker, town alderman, and mayor of Tallulah from 1947 until his retirement in 1974. Andrew Jackson Sevier, Jr., served as sheriff of Madison Parish from 1904 until his death in 1941, when he was briefly succeeded by his wife, Mary Louise Day Sevier. Not a Sevier, but married to the former Rosa Vertner Sevier, was State Representative Mason Spencer, who served in the House from 1924 to 1936. 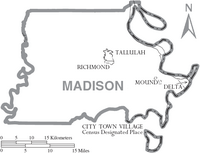 All content from Kiddle encyclopedia articles (including the article images and facts) can be freely used under Attribution-ShareAlike license, unless stated otherwise. Cite this article:
Madison Parish, Louisiana Facts for Kids. Kiddle Encyclopedia.