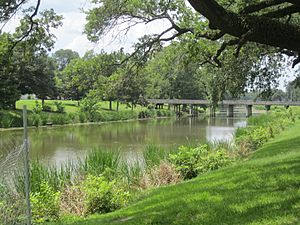 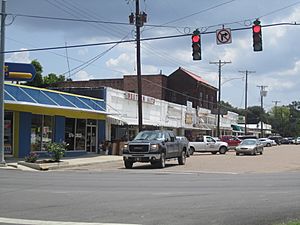 As this was historically a center of agriculture since the antebellum years, producing cotton and pecans, Tallulah and the parish have long had majority-African American populations. The small city is now nearly 77 percent African American; the surrounding parish is 60 percent black. Mechanization and industrial agriculture have reduced the number of jobs, and many residents have moved since the mid-20th century to larger cities with more opportunities.

Tallulah is the principal city of the Tallulah Micropolitan Statistical Area, which includes all of Madison Parish. The Madison Parish Sheriff's office operates the Steve Hoyle Rehabilitation Center in Tallulah.

When the railroad was expanding in the area, a widow who owned a large plantation became friendly with the contractor and persuaded him to change the route of the railroad to run through her plantation. After the railroad was built, she had nothing else to do with him. Feeling rejected, he named the water stop for an old girlfriend named Tallulah, instead of the plantation owner.

During the American Civil War, Union gunboats in Lake Providence headed south to Tallulah, where they burned the Vicksburg, Shreveport, and Texas Railroad's depot and captured Confederate supplies awaiting shipment to Indian Territory. The Confederates in Tallulah offered no resistance. Numerous potential Confederate troops in the area were turned down for enlistment because of a lack of weapons.

Tallulah was the first U.S. city to offer shoppers an indoor shopping mall. A businessman built Bloom's Arcade in 1925, in the style of European arcades. It was one hall with stores on either side much like the ones today. The hall opened into the street on both ends. This landmark is still in Tallulah on U.S. Route 80 on the historical registry. As of late 2013, it has been restored to its original character and functions as an apartment complex. Madison Parish claims the title of birthplace of Delta Air Lines, and the original airport building, Scott's Field, still stands near Tallulah, and is listed on the National Register of Historic Places.

On April 24, 2010, an EF4 tornado touched down near Tallulah, causing numerous injuries. The tornado also damaged a tanker in a chemical plant causing a small nitrogen leak. The tornado continued on the ground across the Mississippi River. As the tornado gained strength, it struck Yazoo, Holmes, and Choctaw counties in Mississippi, causing 10 fatalities and extensive destruction. Significant damage to an industrial plant with injuries, trapped people and destroyed homes were reported in Madison Parish near the Louisiana-Mississippi state line. There were fifty-four tornadoes reported that day.

The Seviers of Tallulah

Tallulah and Madison Parish have been the center of numerous members of the prominent Sevier family, who are descended from John Sevier, a soldier in the American Revolution. Later serving as first Governor of Tennessee, he was the namesake for the city of Sevierville, Tennessee.

James D. Sevier, Sr., and his son, also named James, held the office of tax assessor for more than four decades. Except for the years 1887–90, there was at least one member of the Sevier family in public office for the 122 years preceding 2005. Mason Spencer, husband of Rosa Sevier Spencer, represented Madison Parish in the Louisiana House from 1924–36 and planned to run for governor of Louisiana in 1935 but withdrew his candidacy, and victory went to Richard Leche of New Orleans.

Among the political leaders from this family were William Putnam "Buck" Sevier, Jr., a banker, town alderman, and mayor of Tallulah from 1946-74. Sevier at the time of his death held the record at more than forty-four years as the longest-serving publicly elected official in Louisiana.

According to the United States Census Bureau, the city has a total area of 2.7 square miles (7.0 km2), all land. 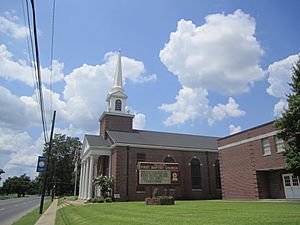 First Baptist Church across from Brushy Bayou in Tallulah, where outdoor baptisms took place in the bayou from the 1920s through the 1940s 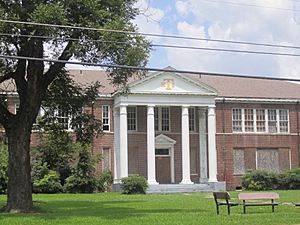 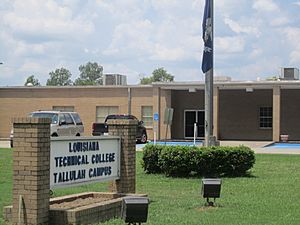 All content from Kiddle encyclopedia articles (including the article images and facts) can be freely used under Attribution-ShareAlike license, unless stated otherwise. Cite this article:
Tallulah, Louisiana Facts for Kids. Kiddle Encyclopedia.