Lake Providence is a town in and the parish seat of East Carroll Parish in northeastern Louisiana, United States. The population was 5,104 at the 2000 census but declined by more than 20 percent to 3,991 in 2010. The town's poverty rate is approximately 55 percent; the average median household income is $16,500, and the average age is 31. The town shares its name with the oxbow lake of the Mississippi River, also called Lake Providence.

The Lake Providence area first opened for European-American settlement in the late 1830s, after Indian Removal. New settlers drained the cypress swamps and cleared the land for cultivation. By 1861, at the start of the American Civil War, the region consisted entirely of large cotton plantations worked by thousands of slave laborers.

The town of Lake Providence began with the arrival of the Union Army in the spring of 1862. Under the direction of General Ulysses S. Grant, Lake Providence was established as a supply depot and base of operations for the Vicksburg Campaign. The soldiers dug a canal between the Mississippi River and Lake Providence. The area was called "Soldiers' Rest", but Grant subsequently moved his troops south for further temporary residence at Winter Quarters south of Newellton in Tensas Parish. As freed or runaway slaves swarmed into the camp at Lake Providence from surrounding plantations, the population quickly soared from a few hundred to several thousand. What began as a simple military supply camp quickly transformed into a "city of negroe refugees.".

By the time Vicksburg, Mississippi fell to the Union in 1863, most planters in the Lake Providence area had fled and left behind their vacant estates. The historian John D. Winters, who was reared in Lake Providence, wrote in the mid-20th century about this period:

The long line of abandoned plantations was then leased by the army and treasury agents to carpetbaggers and to southerners who took the oath of allegiance (known as scalawags). Since the necessary Negro labor, farming implements, and mules were provided by the army, lessees were responsible only for feeding and clothing the Negroes until the harvest, when they paid off their obligations to the army and to the laborers, Yearly expenses ran between $5,000 and $30,000 on a plantation of a thousand acres, while profits might run higher than $200,000. There was little trouble finding lessees for the plantations.

Many of the white lessees showed far less regard for their hired Negro laborers than the most negligent planter had shown for his slave. Negroes old, or infirm, or too young were weeded out and sent to Federal contraband villages and camps located along the river, where they had to be cared for by the provost marshals. In 1863 few lessees paid their labor except in food and clothing. For these items they often charged the Negroes five times the actual value, and at the end of the year the Negro was told that nothing was due him. Some lessees realized up to $80,000 profits, paid their labor nothing, and then boasted of their ability to swindle the Negro. A few lessees used their plantations for shipping out stolen cotton or for illegal trade. Provost marshals and labor agents often were bribed to shut their eyes to malpractices carried on by the lessees.

On July 29, 1863, at Goodrich's Landing south of Lake Providence, Confederate partisan Rangers surprised two companies of black troops in a small fort located on an Indian mound; they seized two hundred prisoners. The Rangers burned cotton gins, plantation houses, and Negro quarters on the estates along the river and in the back country which were occupied by federal lessees and scalawags, the term heaped on those southerners who pledged loyalty to the Union.

In June 1864, some Confederate troops raided the area south of Lake Providence and seized mules and horses and some of the Negroes. Winters writes that these raids

during the critical growing season greatly disrupted affairs, and many plantations grew up in weeds before new laborers and mules could be found. During the Union occupation, lessees rarely made as much as half of the pre-war cotton crop and most made less. . . . 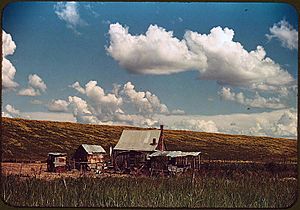 After white Democrats regained power in the late 19th century, Louisiana, like other southern states, enacted a new constitution in 1898, and laws that controlled voter registration and electoral rules, effectively disfranchising blacks despite their stated 15th Amendment right to vote.

This situation persisted until the 1960s. Until 1962, no African Americans had been allowed to register to vote in Lake Providence in forty years. That year, however, U.S. District Judge Edwin Ford Hunter, Jr., based in Lake Charles in the far southwestern corner of the state, personally registered twenty-eight African-Americans in Lake Providence under a provision of the Civil Rights Act of 1960, which had been signed into law by U.S. President Dwight D. Eisenhower. In doing so, Hunter came into a confrontation with Louisiana 6th Judicial District Judge Frank Voelker, Sr., based in Lake Providence, in a dispute over the powers of the national government that attracted national attention.

With its large African-American electorate, Lake Providence today remains a stronghold of the Democratic Party, after many of the more conservative whites switched to the Republicans. In the 2008 and 2012 presidential elections, East Carroll Parish voted handily for Democrat Barack H. Obama of Illinois, rather than his Republican opponents, John S. McCain of Arizona and Mitt Romney of Massachusetts. 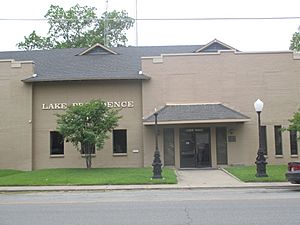 Lake Providence City Hall is located across from the U.S. Post Office.

The existing boundaries of the town constitute the third location of the community. Lake Providence is located adjacent to the Mississippi River. Prior to the building of the current levee system by the United States Army Corps of Engineers, the meandering river would overflow its bank and take valuable lands. It was during these movements that the lake of Lake Providence was created and the town succumbed to the river. Each time the town was taken by the river, the citizens moved.

In the late 18th century goods such as animal pelts, indigo, and cotton were transported on the Mississippi River by people commonly known as longboat men, named for the type of craft that carried the goods. These were eventually replaced by steamboats. Thieves and pirates would raid the boats carrying these products, kill the longboat men, and then sell the goods. There is a bend in the river called Bunch's Bend where a pirate named Bunch would raid the boats. If the longboat men made it past Bunch's Bend without being robbed, they would say they, "made it to Providence." This is where the trading town of Providence was located. It later became Lake Providence when the town was moved to its current location surrounding a natural oxbow lake. Several episodes of the 1959 NBC television series Riverboat, starring Darren McGavin, deal with pirates on the river or the shipment of cotton but in the middle 19th century, rather than the 18th.

The historian John D. Winters describes Lake Providence as "a beautiful oxbow lake some six miles (10 km) long, an old Mississippi river bed with an outlet through Baxter Bayou into Bayou Macon and thus into the Tensas, Ouachita, Black, and Red rivers. 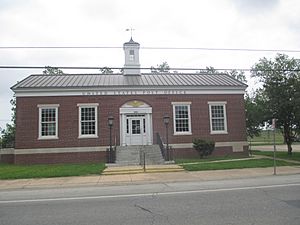 There were 1,707 households out of which 39.3% had children under the age of 18 living with them, 31.2% were married couples living together, 34.1% had a female householder with no husband present, and 30.2% were non-families. 27.8% of all households were made up of individuals and 12.5% had someone living alone who was 65 years of age or older. The average household size was 2.84 and the average family size was 3.49.

All content from Kiddle encyclopedia articles (including the article images and facts) can be freely used under Attribution-ShareAlike license, unless stated otherwise. Cite this article:
Lake Providence, Louisiana Facts for Kids. Kiddle Encyclopedia.