East Carroll Parish (French: Paroisse de Carroll Est) is a parish located in the U.S. state of Louisiana. As of the 2010 census, the population was 7,759. The parish seat is Lake Providence.

The original Carroll Parish, before it was divided into "East" and "West" segments, was named for Charles Carroll of Carrollton, Maryland, the only Roman Catholic signer of the Declaration of Independence and the last surviving signer of the document. The parish was split in 1877. Prior to 1814, all of the territory covered by the current East Carroll Parish was part of the now defunct Warren Parish.

The famous black bear hunt waged in 1907 by U.S. President Theodore Roosevelt began in East Carroll Parish near Lake Providence. When a particular bear managed to elude the hunters, the camp was moved to Bear Lake in Madison Parish near Tallulah. The 21-year-old Arthur Spencer of Richland Parish took a picture of Roosevelt in the heavily armed hunting party. Among the hunters was future Governor John M. Parker, the vice-presidential choice of the Bull Moose Party ticket in the 1916 presidential election.

Of 3,197 counties ranked by the U.S. Census Bureau in 2011 for "estimated percent of people of all ages in poverty", East Carroll Parish was fifth. It was estimated that 44 percent of the county's residents lived in poverty. 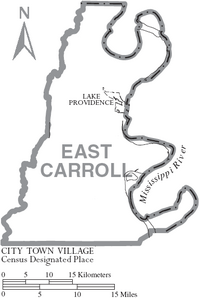 All content from Kiddle encyclopedia articles (including the article images and facts) can be freely used under Attribution-ShareAlike license, unless stated otherwise. Cite this article:
East Carroll Parish, Louisiana Facts for Kids. Kiddle Encyclopedia.