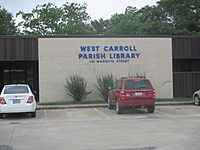 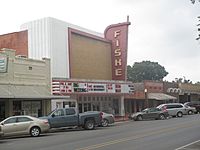 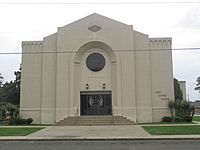 First Baptist Church in Oak Grove is one of the larger congregations in West Carroll Parish, located across from Oak Grove City Hall; pastor Randy J. Messer (since 1993)

West Carroll Parish (French: Paroisse de Carroll Ouest) is a parish located in the northeastern part of the U.S. state of Louisiana. As of the 2010 census, the population was 11,604. The parish seat is Oak Grove. The parish was founded in 1877.

The original Carroll Parish, before it was divided into "West" and "East" segments, was named for Charles Carroll of Carrollton, Maryland, the only Roman Catholic signer of the Declaration of Independence and the last surviving signer of the document.

West Carroll Parish has a long history of inhabitants who predated the formation of the United States, possibly by thousands of years. For a complete history of West Carroll Parish, see Between the Rivers by Florence McKoin, Claitor’s Publishing Company of Baton Rouge.

On the south end of West Carroll Parish is Poverty Point, a nearly square-mile complex of ancient major earthwork semi-circles and radiating lanes, plus additional platform mounds. This is one of the largest Native American earthworks in North America. Archeologists have determined that the site was built in the Late Archaic period beginning about 1500 BCE, and it was the central trading grounds for the Poverty Point culture, people who called the lower Mississippi River Valley home. It has been referred to as the New York City of more than two millennia ago. Artifacts show trading reached to present-day Georgia and Great Lakes states such as Wisconsin. Later historic tribes in the area included the Choctaw and Chickasaw.

Though the area was explored by many French and Spanish in the 16th through 18th centuries, they did not establish permanent settlements, favoring areas on rivers with more direct access to the Gulf and major markets. After the United States' Louisiana Purchase of 1803, all of Northeast Louisiana was considered part of Ouachita Parish, including West Carroll. In 1807, a Methodist minister, Moses Floyd, settled on the west bank of the Bayou Macon. Later a trading post known as "Floyd" developed, and the village began to grow. It was located less than a mile from the Poverty Point site.

As the European-American population of Ouachita Parish continued to increase, the area was split into smaller parishes; in 1832 Carroll Parish was carved out of Ouachita by the state legislature. The parish seat is located in Lake Providence on the banks of the Mississippi River. Throughout the early part of the 19th century, the European-American population of the western portion of Carroll Parish continued to grow; its economy was based mainly on cotton production and timber. By 1855 the population had grown to the point where there were enough votes to move the parish seat west of the Bayou Macon to Floyd. This area had developed into a thriving trading post due to steamboat traffic on the Macon. In 1856 construction began on the new courthouse, which was finished in late 1857.

With the move of the parish seat came more professionals and tradesmen to Floyd, and the town grew exponentially. It was to become the typical frontier town with a hotel,post office, general store and saloons.

In January 1861 the Louisiana Legislature voted to secede from the Union and declare itself a free and sovereign state. Less than two months later, Louisiana joined the Confederacy. According to the book, Between the Rivers, this was the divide that would eventually lead to the creation of West Carroll Parish:

When the Confederate Flag flew over the court house in Floyd, it was saluted by nearly everyone, but not so with our neighbors across the river. Plantation|Planters to the east, either out of conviction to their consciences or to save their property, signed an oath of allegiance to the United States, thus bringing a rift among neighbors who were willing to lose everything including their lives, for the cause of the South; and, they felt very bitter toward any neighbor signing such an oath.

(Note: The oath was required after Union forces occupied Louisiana.)

There was little fighting in the area associated with the Civil War. Some historians attributed this to insurgent activity, such as the Quantrill Gang operating generally in Missouri; also significant was the isolated nature of the area and the vast swamps that surrounded Floyd. Frank James was said to come through with Quantrill in the winter of 1863-1864, on their way to and from Texas. In the early 1870s, Frank and his brother Jesse James robbed banks from Missouri to Texas, and were reported to have spent time in this area.

During the Reconstruction era, local leaders opposed those appointed by the federally appointed state government. Some people worked against the provision of rights to freedmen. In the 1870s, chapters of the White League developed throughout Louisiana, paramilitary groups that intimidated Republicans, repressed voting by freedmen, and supported white Democrats returning to power in the state legislature.

Federal troops were withdrawn from the state in March 1877. Soon after white Democrats regained power in the state legislature, they approved the creation of West Carroll Parish. Initially it had a population of 800 people and 200 families, both white and black. Cotton and timber continued to be the life-blood of the new parish, although areas dependent on agriculture in the late nineteenth and early twentieth century had economic difficulties. The parish had ten cotton gins and three sawmills, and steamboats continued to run Bayou Macon as the main hub of transportation.

Steamboat traffic on the Boeuf and Macon rivers dwindled due to the competition of railways constructed through the South. With the railroad, parish towns began to develop along the north-south road (La. 17). Among these were Pioneer, Forest, Oak Grove and Kilbourne. Closest to the parish seat and with a major sawmill, Pioneer grew rapidly.

In January 1909, Oak Grove was incorporated. Many of the parish’s prominent citizens, such as Leopold Lipp, saw its location where the North-South and East-West (La. 2) roads crossed. It was to become the economic center of the parish in the near future.

In 1916, construction began on the new courthouse, and before it was completed a hail storm and tornado devastated the town in late 1916, destroying the original theater, a large majority of the new courthouse, and many other buildings in town. In January 1917 the new courthouse was opened and so began of the modern era of Oak Grove. Its Main Street had businesses varying from general stores, drug stores, a modern theater, cafes, two banks and more.

The economy of the parish continued to be dominated by the timber and cotton industry. In the early part of the 20th century, Donald B. Fiske opened a state-of the art cotton gin and compress to complement his sawmill. It became one of the largest employers of the parish.

After World War II, the town and parish continued to prosper with new industry and business. In 1950, the most modern movie theatre in the South was opened by Fiske, and it is still in operation today. In this area, farmers began to cultivate sweet potatoes rather than cotton, as the textile industry moved out of the United States. A cannery was built along the railroad, and operated until near the end of the 20th century.

In the 1960s and 1970s, city growth continued, with the construction of a modern hospital, nursing home and the Wells Lamont garment factory. In 1969 the entrepreneur Shelton Ruffin built a pre-manufactured pole barn for personal use. Its style and construction quickly gained in popularity around the region, thus spurring the formation of Ruffin Building Systems. It is now one of the largest manufacturers of metal buildings in the South and ships buildings internationally. With the coming of the 1980s and the rise of the large department stores, business on Main Street began to decline. This historic district continues to remain vibrant with over 50 percent of its buildings occupied.

With the coming of the 21st century, entertainment and retail shopping have become major parts of the economy in West Carroll. In 2004 the Thomas Jason Lingo Community Center opened with a 1,000-seat auditorium; it has many live events each year. The Fiske Theatre has been renovated and returned to regular operation as a first-run movie theatre. Both of these venues bring families from all over Northeast Louisiana and Southeast Arkansas to the parish for entertainment. The opening of a Super Wal-Mart in 2006 has contributed to West Carroll becoming a regional retail hub. 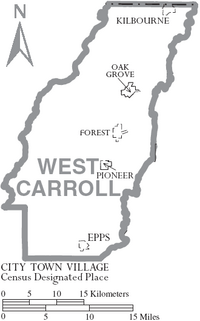 All content from Kiddle encyclopedia articles (including the article images and facts) can be freely used under Attribution-ShareAlike license, unless stated otherwise. Cite this article:
West Carroll Parish, Louisiana Facts for Kids. Kiddle Encyclopedia.