Tensas Parish (French: Paroisse des Tensas) is a parish located in the northeastern section of the State of Louisiana; its eastern border is the Mississippi River. As of the 2010 census, the population was 5,252. It is the least populated parish in Louisiana. The parish seat is St. Joseph. The name Tensas is derived from the historic indigenous Taensa people. The parish was founded in 1843 following Indian Removal.

The parish was developed for cotton agriculture, which dominated the economy through the early 20th century. There has also been some cattle ranching in the 1930s and timber extraction.

Tensas Parish was the home to many succeeding Native American groups in the thousands of years before European settlements began. Village and mound sites once built by these peoples have now become archaeological sites. One example is the Flowery Mound, a rectangular platform mound just east of St. Joseph measuring 10 feet (3.0 m) in height and 165 feet (50 m) by 130 feet (40 m) at its base and a summit measuring 50 feet (15 m) square. Core samples taken during investigations at the site have revealed the mound was built in a single stage and because the fill types can still be differentiated it suggests the mound is relatively young. Radiocarbon dating of charcoal found in a midden under the mound reveals that the site was occupied from 996–1162 during the Coles Creek period. The mound was built over the midden between 1200–1541 during the Plaquemine/Mississippian period. The corners are oriented in the cardinal directions. Several others include Balmoral Mounds, Ghost Site Mounds, and Sundown Mounds.

During the American Civil War, private citizens, particularly planters, organized, equipped, and transported military companies. In Tensas Parish, cotton planter A. C. Watson provided one company of artillery with more than $40,000. In April 1862, Governor Thomas Overton Moore, reconciled to the fall of New Orleans, ordered the destruction of all cotton in those areas in danger of occupation by Union forces. Along the levees and atop Indian mounds in Tensas Parish, thousands of bales of cotton burned for days. At the time, Tensas Parish was second only to Carroll Parish (subsequently divided into East and West Carroll) in the overall production of cotton in Louisiana.

Near Newellton is the Winter Quarters Plantation restoration, where Union General Ulysses S. Grant and his men spent the winter of 1862-1863, prior to launching the assault in the spring and summer of 1863 against Vicksburg, Mississippi, to the northeast of Tensas Parish.

In 1864, Captain Joseph C. Lea of the Missouri guerrillas, with two hundred men, moved into Tensas Parish and came upon a fortification held by four hundred Federal soldiers under the command of Colonel Alfred W. Eller. Lea inflicted heavy casualties and drove the men to the Mississippi River, where they boarded their boats. Lea seized a federal warehouse with gunpowder, groceries, and medical supplies. Facing attacks from the Union forces who tried to return to their fortification, Lea managed to secure seventy-five Federal wagons and cotton carts, all of which he dispatched to Shreveport.

Franklin Plantation, owned by a physician, Allen T. Bowie, was considered the most elegant of the antebellum homes about the oxbow lake, Lake St. Joseph, near Newellton. A Missouri Confederate wrote that the area was "unsurpassed in beauty and richness by any of the same extent... in the world." Union officers in charge of the XIII and XVII Corps kept close watch on the troops to prevent looting as the men marched southward headed indirectly to Vicksburg. When General William Tecumseh Sherman's XV Corps joined Grant's forces, however, the soldiers became lawless. On May 6, 1863, rowdies from General James Madison Tuttle's division burned most of the mansions which fronted Lake St. Joseph, including Dr. Bowie's beloved Franklin Plantation.

Toward the end of the war, schools were established for African American children in northeastern Louisiana, including Tensas and Concordia parishes, some through the sponsorship of the American Missionary Association. According to the historian John D. Winters of Louisiana Tech University, the students

ranged in age from four to forty, were poorly clothed, loved to fight, and were 'extremely filthy, their hair filled with vermin.' Religious instruction, with readings from the Bible and prayers, was emphasizsed while reading from primers and studying spelling and writing rounded out the course work. The program stressed 'a maximum of memory and a minimum of reasoning.' The schools sponsored by the Christians societies were gradually taken over by a board of education and supported by special property and crop taxes. These schools operated primarily along the Mississippi River and few, if any, were established in the interior [of Louisiana].

By the turn of the 20th century, with Civil War memories still present in the people's minds, St. Joseph numbered no more than 720 residents (with Tensas Parish at 19,070), most having been engaged in cotton growing and related river work.

Prior to January 1964, when fifteen African Americans were permitted to register, there were no black voters on the Tensas Parish rolls. Tensas was hence the last of Louisiana's parishes to enfranchise African-Americans.

In 1962, Tensas Parish, with only whites registered, gave the Republican Taylor W. O'Hearn, later a state representative from Shreveport, 48.2 percent of the vote in a race for the U.S. Senate against incumbent Democrat Russell B. Long. Tensas Parish also voted for Republican presidential nominee Barry M. Goldwater in 1964, when few blacks were yet registered.

After the passage of the Voting Rights Act of 1965, large numbers of Tensas Parish blacks began registering to vote. These new black voters were staunchly Democratic; since then, the parish has been a Democratic stronghold. Some white Democrats, however, have continued to win some public offices in the parish, including Sheriff Rickey A. Jones and several school board members. 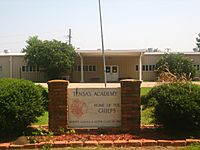 Tensas Parish was de jure desegregated until the fall of 1970; however, the schools remain de facto segregated by parental decisions. The majority of white students attend the private Tensas Academy in St. Joseph; nearly all African American pupils attend the public schools, where few whites are registered; enrollment in the public system, now based in St. Joseph, has declined in recent years. The former Newellton High School in Newellton and Waterproof High School and Lisbon Elementary School in Waterproof have closed because of decreased enrollments. Tensas High School in St. Joseph is the latest consolidation in 2006 of the former Joseph Moore Davidson High School of St. Joseph as well as Newellton and Waterproof high schools.

In the 1860 presidential election, the parish supported by plurality the Constitutional Union Party candidate, U.S. Senator John Bell of Tennessee, who pledged to support the Constitution of the United States, the Union of states, and the "enforcement of the laws." Louisiana as a whole narrowly cast its electoral votes for the Southern Democratic choice, Vice President John C. Breckinridge of Kentucky. Regular Democratic nominee Stephen A. Douglas of Illinois ran poorly in Louisiana, and the Republican candidate, Abraham Lincoln, also of Illinois, was not even listed on the state ballot.

In the 2008 presidential contest, Democratic nominee Barack Obama of Illinois won Tensas Parish, 1,646 (54.1 percent) to 1,367 (45 percent) for the Republican Senator John McCain of Arizona. In 2012, President Obama again carried the parish, with 1,564 votes (55.6 percent), while rival Mitt Romney polled 1,230 votes (43.7 percent). The Obama-McCain and Obama-Romney voter divisions in 2008 and 20012 are consistent with the racial complexion of Tensas Parish.

In the 2004 U.S. Senate primary election, Tensas Parish gave a plurality to the successful Republican candidate, U.S. Representative David Vitter of St. Tammany Parish, who polled 1,145 votes (41 percent) compared to 881 ballots (32 percent) for his chief Democratic rival, Congressman Chris John of Crowley. There was no general election to determine if Vitter would have surpassed 50 percent plus one vote to obtain an outright majority in this traditionally Democratic parish. 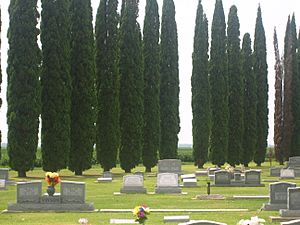 Prior to 1968, each parish regardless of population had at least one member in the Louisiana House of Representatives. The last member to represent only Tensas Parish was Democrat S. S. DeWitt of Newellton and later St. Joseph. DeWitt won the legislative post in 1964 by unseating 20-year incumbent J.C. Seaman of Waterproof. He lost the seat in the 1971 primary to Lantz Womack of Winnsboro in Franklin Parish.

Between July 1, 2006, and July 1, 2007, Tensas Parish lost 173 residents, or 2.9 percent of its population. Police Jury Vice President Jane Merriett Netterville (born July 1956), a Democrat from St. Joseph, expressed surprise at the latest exodus figures considering that some had moved there after Hurricane Katrina. "Maybe the loss was the people who died. We have a large elderly population," she told the Baton Rouge Morning Advocate. Netterville explained that younger people leave Tensas Parish because of the scarcity of higher-paying jobs.

Tensas Parish has one principal cemetery, Legion Memorial, established in 1943 and located just north of Newellton. A new entrance sign to the cemetery has been erected. The cemetery is particularly well-maintained.

There are three communities in the parish: Newellton, St. Joseph, and Waterproof. Newellton was founded by the planter and attorney John David Stokes Newell, Sr., who named it for his father Edward D. Newell, a native of North Carolina. All three communities are linked by Highway 65, which passes just to the west of each town. The developed Lake Bruin State Park lies near St. Joseph. Lake Bruin is an oxbow lake created by the meandering of the Mississippi River.

The mostly rural parish has continued to lose population. Between July 1, 2006, and July 1, 2007, Tensas Parish lost 173 residents, or 2.9 percent of its population. Police Jury Vice President Jane Merriett Netterville, a Democrat from St. Joseph, expressed surprise at those figures, as a number of people had moved into the parish in 2005 and 2006 as refugees from New Orleans and coastal areas after Hurricane Katrina. "Maybe the loss was the people who died. We have a large elderly population," she told the Baton Rouge Morning Advocate. Netterville explained that younger people leave Tensas Parish because of the scarcity of higher-paying jobs.

Tensas Parish is served by a weekly newspaper, The Tensas Gazette, which began in 1871 under the title The North Louisiana Journal. It was renamed The Tensas Gazette in 1886. Some 1,300 copies are circulated each Wednesday throughout the parish.

Josiah Scott (born 1874 in Vidalia) was reared by a maternal uncle who was the editor of the Concordia Sentinel. At the age of twenty, Scott took over The Tensas Gazette, then owned by Judge Hugh Tullis. In 1906, Scott purchased the paper from Tullis and continued as editor until his death in 1953. He was known for political commentary over the decades.

Upon Scott's death, Paul Alexander Myers, Jr., and his wife, the former Patricia Wilds (1924-1999) purchased The Tensas Gazette and operated it together until his death in 1964. Thereafter until her retirement in 1988, Mrs. Myers owned and published the paper. From 1974 to 1988, she concurrently owned the Richland Beacon-News in Rayville, in Richland Parish. The daughter of Oliver Newton Myers (1900-1965) and the former Alice Robinson (1898-1948) of Natchez, Mississippi, Myers graduated from the former Joseph Moore Davidson High School in St. Joseph and the University of Alabama in Tuscaloosa. As a member of the Louisiana State Park Foundation Board, she was instrumental in the reopening of Winter Quarters State Historic Site south of Newellton. She was a member of the Tensas Development Board, the Tensas Garden Club, the Lake Bruin Country Club, and the Daughters of the American Revolution. In 1997, she was named "Citizen of the Year" by the St. Joseph chapter of Rotary International. The Myerses had four children: Paul Alexander "Andy" Myers, III, of Gulf Breeze, Florida, LaRue Myers Cooper of Dry Prong, Morris Newton Myers of Temecula in Riverside County, California, and Alice Robinson "Robin" Myers of St. Joseph, who is named for her maternal grandmother. A Roman Catholic, Mrs. Myers is interred at the Natchez City Cemetery. 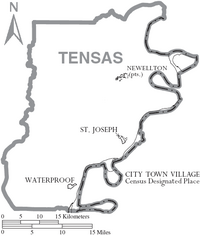 All content from Kiddle encyclopedia articles (including the article images and facts) can be freely used under Attribution-ShareAlike license, unless stated otherwise. Cite this article:
Tensas Parish, Louisiana Facts for Kids. Kiddle Encyclopedia.