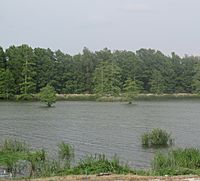 Lake St. Joseph as seen from behind Britt's Pharmacy in Newellton

Newellton is a town in northern Tensas Parish in the northeastern part of the U.S. state of Louisiana. The population is 1,227 in the 2010 census, a decline of 255 persons, or 17 percent, from the 2000 tabulation of 1,482. Newellton in 2010 was 51 percent African American; in earlier census reports it had been 60 to 65 percent black. The average age of the population there is 41 years.

Newellton is west of the Mississippi River on Lake St. Joseph, an ox-bow lake. Further south toward St. Joseph, the parish seat of government, is another ox-bow lake, Lake Bruin, a part of which is the popular Lake Bruin State Park.

The French explorer La Salle passed through the Newellton area in 1682 as he followed the Mississippi River to its mouth near the future New Orleans.

Newellton itself was founded in the early 19th century by the Routh family, for whom the defunct Routhwood Elementary School was named. John David Stokes Newell, Sr., a planter and lawyer in St. Joseph, the seat of Tensas Parish, named the settlement for his father, Edward, a native of North Carolina who relocated to Tensas Parish in 1834.

John Newell was a Confederate veteran who joined the Tensas Cavalry and fought in 1862 in both Shiloh, Tennessee, and Corinth, Mississippi. In 1864, he married Nannie Newell, a first cousin, and they had four sons. After the American Civil War, he returned to cotton planting on the Cypress Plantation and resumed his legal practice. He promoted public education and was named president of the Tensas Parish School Board in 1866 and again in 1892. He died in St. Joseph and is interred at Vicksburg, Mississippi.

The Newell Cemetery on Louisiana State Highway 575 offers the history of the Newell family inscribed on a marble archway at the entrance.

During the Civil War on June 4, 1863, Confederate cavalry led by Major Isaac F. Harrison attacked a Negro camp of instruction on Lake St. Joseph, killed the white captain and twelve blacks, and captured 875 others. Harrison retrieved a supply of arms, medicine, and other supplies left behind by the Union.

South of Newellton is the restored Winter Quarters State Historic Site plantation house, where troops under Union General U.S. Grant spent the winter of 1862-1863, prior to embarking on the blockade of Vicksburg the following spring and summer. Earlier Grant and his men had established temporary residence further north in Lake Providence in what is now East Carroll Parish. Winter Quarters is not mentioned by the historian John D. Winters in his encompassing 1963 work, The Civil War in Louisiana, but Winters does cover several wartime experiences in Tensas Parish as a whole.

Myrtis Jones Crawley (born October 1940) recalls that Newellton in the mid-20th century had several clothing stores, drug stores, grocery stores, a bus station, train station, and theater. The dime store, she remembers, had a soda fountain, where teen-agers gathered. "In the days of growing up in Newellton, there were love songs and soft music. Then came rock and roll, and Elvis Presley ... It was a time to live and have fun, for life was ever changing."

During the 1960s and early 1970s, Newellton was the home on U.S. Route 65 (known as "River Road") of Dutch Gardens, a 13-acre tulip field which offered a Dutch-style windmill, cheese, wooden shoes, and other items associated with the Netherlands. Marigolds and gladioli were in bloom. More than 100,000 visited Dutch Gardens in 1965 alone. There was no admission; the snack bar and curio shop sought to finance the operation. Dutch Gardens was owned by businessman Edwin Randolph McDonald, Sr. (1899–1976), a native of Gainesville, Florida. Dutch Gardens closed permanently and was sold at auction on February 26, 1972. The closure also affected the Great River Road Restaurant and the Old Barn Museum. The structures were all subsequently razed.

Prior to the 1970s, many people came from miles away on Saturdays to downtown Newellton, when the town still had multiple businesses. Newellton High School alumnus Robert Patt recalls the town was "like living in Mayberry with Andy Griffith and Barney Fife. The people were great, no crime and loads of fun. The town on Saturday evening was full, and most of the people were like family."

Similarly, Jerry Kelly recalls that Newellton people were not respecters of persons: "You were judged by your actions and not by your social standing. I loved my years at Newellton High School and wouldn't trade them for anything. Playing football probably gave me more character, not to mention 'bad knees' and 'a crooked nose' than anything I did."

Ronald Ray Graves recalls his growing up in Newellton as "a great experience, and I feel like part of me has always stayed there. It is a sad feeling when I go back now and see that the town has all but dried up. In the 1960s, Newellton was a really active place, especially on Saturday nights. I worked at Camey Arnold’s grocery store, and at 10 p.m. on Saturday we had to go out into the street to tell people to come pick up their groceries. Everyone in Newellton was caring and friendly. I don't remember anyone that wasn't actively part of the town. The people there cared about one another and supported the activities, especially those that were for the youth . . . "

Alice Hull Andrey recalls the safety of the Newellton of the past: "We never locked our doors or car. We could leave our bicycles out with no fear they would be taken. [After basketball games] we could walk home late at night. This could never be done today. . . .

Newellton High School, which served grades pre-kindergarten-12, had only seventy-four students at the close of the 2005-2006 academic year. The Tensas Parish School Board first voted on May 18, 2006, by a four-to-three margin to keep Newellton High functioning for at least an additional year. Then Superintendent Carol Shipp Johnson had proposed that the school be closed and that all the Newellton students be bused to St. Joseph. Under the superintendent's proposal, high schools students would have attended Joseph Moore Davidson High School, which serves only grades 7-12 and also had low enrollment.

Ultimately, it was decided to consolidate Newellton and Davidson schools into Tensas High School, with grades 7-12 at the Davidson campus in St. Joseph, where pupils from the zone of the former Waterproof High School in Waterproof were already in attendance. Violence broke out at the consolidated school on November 2, 2006, when fourteen male students were arrested by the office of Tensas Parish Sheriff Rickey Jones.

Newellton High had a modern facility, which was upgraded in 1976, and the board was reluctant to abandon a structure still in good condition even though the enrollment numbers could not sustain continuation. The elementary grades continue to operate on the Newellton campus through grade eight. Seventh and eighth graders in Tensas Parish outside of Newellton attend Tensas High School if they are enrolled in public school.

In August 1970, Newellton High School was among the last of Louisiana public schools to be desegregated under federal court orders. William Edward "Bill" Vosburg (born October 13, 1940), a native of New Roads in Pointe Coupee Parish, was the principal during the early years of transition. The superintendent at the time was Charles Edgar Thompson (1932–1993), a Tensas Parish native who later accepted a position with the Louisiana Department of Education in Baton Rouge as the deputy superintendent for special education under then Superintendent J. Kelly Nix. When Thompson left the superintendency in 1977, Vosburg was named his successor and remained in the position for four years.

Founded in 1875, Newellton was in 1904 designated a village, with Louis Buckner as the first mayor. Buckner served a single term from 1904 to 1908. On April 4, 1951, under Mayor T. T. Hargrove, Newellton was upgraded to a town through the state Lawrason Act.

In March 2014, Newellton became debt-free. Long-term alderman Edwin Britt, who operates the town pharmacy, said the community has struggled with declining population and the accompanying revenue sources. The town has an annual operating budget of $400,000 to $500,000. Over recent years, Newellton has lost its hospital, sawmill, and detention center. Most residents are employed in the agricultural sector. Newellton is renovating its town hall, a project already funded, and is launching a $200,000 street improvement plan, funded mostly by grants.

In 2012, the former Newellton mayor, Democrat Alex Davis (born 1942), did not seek a fourth term. The first African American in the position, Davis unseated the 34-year incumbent Edwin G. Preis, Sr., a white businessman, in the nonpartisan blanket primary held on October 7, 2000. Davis received 366 votes (56.8 percent) to Preis' 184 (28.6 percent), and Floyd Aaron "Coonie" McVay's 94 votes (14.6 percent). A native of Oak Grove in West Carroll Parish, McVay was formerly the Newellton police chief. He died in 2012 at the age of eighty.

The current mayor is the African-American Democrat Timothy Durell Turner (born 1971), the former District 1 alderman, who won the election held on December 8, 2012, by a single vote, 217-216, over the Republican candidate, James Carroll Fuller (born 1936), the former District 5 alderman. Fuller, who is white, is a former resident of Braxton, Mississippi, and Denham Springs, Louisiana. Fuller had led Turner, 259 (44.7 percent) to 207 (35.8 percent), in the higher-turnout primary election held on November 6, with another 113 votes (19.5 percent) then cast for a second Democrat, Knola Ransome.

In 2016, Fuller again challenged Turner and once again lost by one vote, 210 for Fuller and 211 for Turner.

The Newellton police chief, Johnny Gales (born 1951), a Democrat, was reelected in 2012. There are five municipal alderman, one of whom, Lavone G. Garner from District 5, is a Republican. She was elected to succeed Carroll Fuller, who left the council with his first race for mayor.

As of 2013[update], there were four police officers and Chief Gales in Newellton, with two marked cars and one unmarked, and eighteen volunteer firefighters. The town clerk is Rhonda King (born 1953).

Prior to 1968, each parish regardless of population had at least one member in the Louisiana House of Representatives. The last member to represent only Tensas Parish was then Democrat S. S. DeWitt of Newellton and later St. Joseph. DeWitt represented Tensas Parish from 1964–1968, and then from 1968–1972, he and Lantz Womack of Winnsboro, the seat of Franklin Parish, together represented Franklin, Tensas, and Madison parishes. Womack defeated DeWitt in single-member District 20 in the 1971 party primary. Only after leaving office did DeWitt later switch to Republican affiliation.

In 1995, a Baton Rouge attorney, Democrat Phil Preis, son of then Mayor Edwin Preis, was among sixteen gubernatorial candidates who sought to succeed Edwin Washington Edwards. He polled 133,271 (9 percent) of the votes statewide. In Tensas Parish, he received a plurality of the ballots, 1,233 votes (36.9 percent). The eventual winner of the election, Republican Murphy J. "Mike" Foster, Jr., polled only 232 votes (6.9 percent) in Tensas Parish in the primary. When Preis ran again for governor in 1999, he polled 144 votes (4.2 percent) in his native Tensas Parish.

There were 536 households out of which 37.3% had children under the age of 18 living with them, 34.5% were married couples living together, 30.0% had a female householder with no husband present, and 29.7% were non-families. 26.9% of all households were made up of individuals and 11.9% had someone living alone who was 65 years of age or older. The average household size was 2.63 and the average family size was 3.19.

All content from Kiddle encyclopedia articles (including the article images and facts) can be freely used under Attribution-ShareAlike license, unless stated otherwise. Cite this article:
Newellton, Louisiana Facts for Kids. Kiddle Encyclopedia.