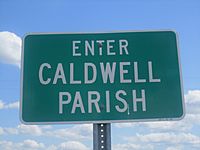 Caldwell Parish (French: Paroisse de Caldwell) is a parish located in the U.S. state of Louisiana. As of the 2010 census, the population was 10,132, making it the fifth-least populous parish in Louisiana. The parish seat is Columbia. Most residents live in the country even beyond the three rural communities in the parish.

Originally a part of Catahoula and Ouachita parishes, Caldwell Parish was established within its present boundaries on March 6, 1838, with earlier settlements recorded to have been made soon after the Louisiana Purchase in 1803. Columbia, the parish seat, was founded in 1827, at a natural crossing on the Ouachita River—a river with a national reputation for its natural beauty. The Ouachita divides the parish into delta farmland and wetlands on the east, and piney woods hill country on the west. In the 1800s, Columbia became a steamboat town for the transport of timber staves and cotton. Forestry and agriculture are still the prominent industries in the parish.

Having a very diverse geographical and plant environment, Caldwell Parish is home to a one-thousand acre preserve, located near Copenhagen. Run by the Nature Conservancy, it attracts botanical and archeological enthusiasts from a wide area. The University of Louisiana at Monroe owns a one-hundred acre outdoor classroom, located near Hough Bend, that is used primarily for tree identification. The U.S. Army Corps of Engineers owns an outdoor preserve located on Lock and Dam Road. Together with its rivers, lakes and bayous, and the 65,000 acre Boeuf Wildlife Preserve, Caldwell is a huge attraction for hunters and anglers.

Caldwell Parish has been home to The Louisiana Art and Folk Festival since 1956. Held during the second weekend of October on Main Street in Columbia, this festival celebrates the history and culture of Caldwell Parish, with hundreds of pieces of arts and craft, entertainment, and good food. The Louisiana Artists Museum, also on Main Street in the historic Schepis Building, features rotating exhibits and is listed in the National Register of Historic Places. The Martin Homeplace Museum showcases artifacts and memorabilia from Caldwell Parish's rich cultural history in a farmhouse built in 1878 on an 1816 Spanish land grant. It too is on the National Register of Historic Places. The annual Lions Club Championship Rodeo is a three-day event every June, recognized as the longest continuous running rodeo in the state, where more than 15,000 hot dogs are consumed each year.

The Morengo Swamp Mudride, the world's largest four-wheeler mud ride in the world, is held the first weekend in June. Thousands of riders from across the nation converge on Hebert in the northeast part of the parish for this spectacular event. Proceeds from the ride go to the "Wish I Could" Foundation. 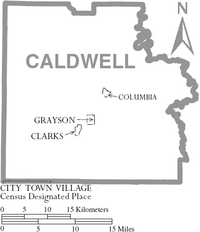 All content from Kiddle encyclopedia articles (including the article images and facts) can be freely used under Attribution-ShareAlike license, unless stated otherwise. Cite this article:
Caldwell Parish, Louisiana Facts for Kids. Kiddle Encyclopedia.