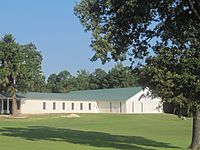 The Evergreen Missionary Baptist Church and Cemetery, with a green roof and large bell, is located off U.S. Highway 71 in northwestern Winn Parish south of Saline Bayou. Country churches of this kind are common in North Louisiana.

Backwater flooding in Winn Parish led temporarily in June 2015 to a detour around U.S. Highway 71 at St. Maurice, Louisiana.

Winn Parish (French: Paroisse de Winn) is a parish located in the U.S. state of Louisiana. As of the 2010 census, the population was 15,313. Its seat is Winnfield. The parish was founded in 1852. It is last in alphabetical order of Louisiana's sixty-four parishes.

Winn is separated from Natchitoches Parish along U.S. Highway 71 by Saline Bayou, the first blackwater protected waterway in the American South.

Winn Parish was established in 1852 from lands which had belonged to the parishes of Catahoula, Natchitoches, and Rapides.

During the Civil War, David Pierson, a young attorney, was elected to represent the parish at the Secession Convention called in January 1861 in Baton Rouge by Governor Thomas Overton Moore. Pierson voted against secession and refused, along with several others, to change his "no" vote at the end of the process when asked to do so to make the final tally unanimous.

There was little military action in Winn Parish during the Civil War, but there was a problem with conscripts fleeing into the wooded areas to avoid military duty. The Confederate States Army defeated a Union detachment sent to destroy a salt works in the parish. Winn Parish contributed to the $80,000 raised to build fortifications on the nearby Red River.

After the war, bandits roamed the Natchez Trace or Harrisonburg Road that ran through the lower part of the parish. Among the worst were the West and Kimbrell clan. For seven years they preyed especially on travelers and migrants passing through the area.

In April 1873, white Democrats forming a militia from Winn Parish joined with ex-Confederate veterans from Rapides and Grant parishes against Republican blacks in the Colfax Massacre in neighboring Grant Parish. They attacked freedmen defending the parish courthouse and two Republican officeholders in the aftermath to the disputed gubernatorial election of 1872. Among the 80-150 blacks killed were at least 50 who had surrendered; a total of three white men were killed in the confrontation.

Winn Parish is the home of the former Long family Democratic political dynasty, started by Huey Long. It is the birthplace of three governors of Louisiana. Governor Earl Long is buried in Winnfield in a public square known as the Earl K. Long State Park.

Since 1956, Winn Parish has had three sheriffs named "Jordan." R. Sanford Jordan, a Democrat, served from 1956 to 1976. A second but unrelated Jordan, James Edward "Buddy" Jordan (1942-2012), was the sheriff from 1992 to 2008, when he was defeated by a 10-vote margin by a fellow Democrat, Albert D. "Bodie" Little. Subsequently, A. D. Little was forced from office in 2011 and convicted thereafter on federal drug charges. Cranford Jordan, Jr. (born 1952), a nephew of Sanford Jordan, won the office on his third attempt in the November 2011 general election and took office in July 2012. Cranford Jordan is an Independent.

A new Winn Parish Library opened in Winnfield in 2014. The 11,000 square-foot building cost $2.5 million and houses 75,000 books, 420 periodicals, and sixteen computer stations. There are also facilities for children, special-needs citizens, genealogy and history buffs, and access to on-line higher-education studies.

Public libraries in Louisiana began as early as 1920, with the establishment of the Louisiana Library Commission, the forerunner to the State Library of Louisiana. Assistance from the Carnegie Foundation began in 1925. The Winn Parish facility opened in 1937 during the administration of Governor Richard Leche in a former bank building on Main Street. Winn was the first of three parishes to vote a library tax millage. In 1940, property owners voted for a three-mil maintenance tax for the library. After World War II, the library was moved to a wooden building, also on Main Street and one block west of the parish courthouse. In 1954, a brick structure replaced the wooden building at the same location, a project pushed by the then library director, Ruby Hanks. After sixty years, the new library now sits at the corner of Main and St. John streets. Construction of the facility was financed by a $2 million bond issue approved by voters in 2012. It is maintained by a now eight=mil property tax.

There are also branch libraries in Atlanta, Calvin, Dodson, and Sikes, with a total collection in the branches of nearly 80,000 books.

A Company 199TH FSB (Forward Support Battalion) resides in Winnfield, Louisiana. This unit deployed twice to Iraq as part of the 256TH IBCT in 2004-5 and 2010. 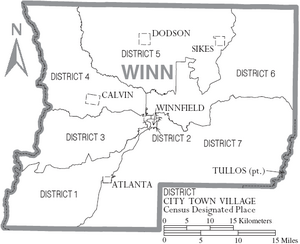 Map of Winn Parish, with municipal labels and districts

All content from Kiddle encyclopedia articles (including the article images and facts) can be freely used under Attribution-ShareAlike license, unless stated otherwise. Cite this article:
Winn Parish, Louisiana Facts for Kids. Kiddle Encyclopedia.