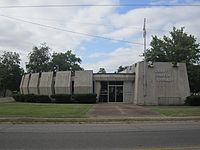 The Grant Parish Library is located near the courthouse. 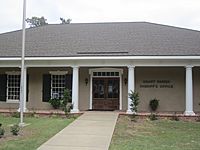 The Grant Parish Sheriff's Office is located behind the courthouse. 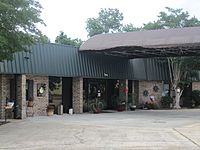 Grant Parish (French: Paroisse de Grant) is a parish located in the north central portion of the U.S. state of Louisiana. As of the 2010 census, the population was 22,309. The parish seat is Colfax (pronounced CAHL-facks). The parish was founded in 1869.

Grant Parish is part of the Alexandria, LA Metropolitan Statistical Area and Red River Valley. From 1940-1960, the parish had a dramatic population loss, as many African Americans left in the Great Migration to seek better opportunities elsewhere. Such migration continued until about 1970. The parish was also one of the eleven Reconstruction parishes created, created from Winn and Rapides parishes.

Grant Parish is a home of United States Penitentiary, Pollock.

Grant Parish was originally a part of the more populous Rapides Parish to the south. Prior to the American Civil War, the center of activity focused upon "Calhoun's Landing," named for the cotton and sugar planter Meredith Calhoun, a native of South Carolina. Calhoun also published the former National Democrat newspaper in what became Colfax, the seat of government of the new parish.

Grant was one of several new parishes created by the Reconstruction legislature in an attempt to build the Republican Party. Founded in 1869, it had a slight majority of freedmen. It was named for U.S. President Ulysses S. Grant. The parish seat of Colfax was named for Grant's first vice president, Schuyler M. Colfax (pronounced COAL-facks) of Indiana. However, the town of Colfax is pronounced CAHL-facks. The parish encompassed both cotton plantations and pinewoods. It was one of several areas along the Red River that had considerable violence during Reconstruction, as whites tried to maintain social control.

The gubernatorial election of 1872 was disputed, leading to both parties' certifying their slates of local officers. The election was finally settled in favor of the Republican candidates, but the decision was disputed in certain areas. As social tensions rose, Republican officials took their places at the courthouse in Colfax. They were defended by freedmen and state militia (mostly made up of freedmen), who feared a Democratic Party takeover of the parish. Amid widespread rumors, whites organized a militia and advanced on the courthouse on Easter Sunday, 1873. In the ensuing violence, three whites and 120-150 blacks were killed, including 50 that night who were held as prisoners. Leading 20th-century historians renamed the Colfax Riot, the original state designation, as the Colfax Massacre. The total number of freedmen deaths were never established because some of the bodies were thrown into the river and woods.

The white militia was led by Christopher Columbus Nash, a Confederate officer who had been a prisoner of war at Johnson's Island in Ohio. It consisted of veterans from Grant and neighboring parishes. The following year, Nash gathered many of the white militia members as the basis of the first chapter of the White League. Other chapters quickly grew up across the state. The White League's organized violence in support of the Democratic Party included widespread intimidation of black voters. The League was integral to white Democrats' regaining power in the state by 1876. Soon after, they effectively disfranchised most blacks, a situation that persisted until after the Civil Rights-era legislation of the mid-1960s.

Grant Parish! had the highest growth rate in central Louisiana in the five-year period between 2001 and 2006, according to projections of the United States Census Bureau. The parish has had a 4.3 percent growth rate compared to 1.7 percent for its larger neighbor, Rapides Parish. Some neighboring parishes, including Winn, have experienced population decreases.

The last Democrat to win in Grant Parish at the presidential level was former Governor Jimmy Carter of Georgia in his 1976 defeat of U.S. President Gerald R. Ford, Jr., with Bob Dole as the Republican vice-presidential choice.

In December 2016, a courthouse nativity scene in Colfax drew a complaint from the New Orleans chapter of the American Civil Liberties Union. In a letter to the Grant Parish Police Jury, the ACLU said that officials must include secular symbols of the Christmas holiday if a nativity scene is placed alone on public property. District Attorney Jay Lemoine objected to the ACLU challenge in a statement to Alexandria Town Talk: "There have been various holiday displays presented both inside and outside the courthouse over many years. This year, as in years past, they include both secular and non-secular symbols. It is unfortunate that some are offended by these displays during this holiday season, as that was not the intent."

The decreases in population from 1910–1920, and from 1940–1960, were chiefly caused by different phases of the Great Migration, as African Americans left segregation and oppression of the South to seek better opportunities in the North, during the first phase, and in the West, especially California's defense industry, in the second phase. Tens of thousands of migrants left Louisiana during times of agricultural difficulties and the collapse of agricultural labor after mechanization.

All content from Kiddle encyclopedia articles (including the article images and facts) can be freely used under Attribution-ShareAlike license, unless stated otherwise. Cite this article:
Grant Parish, Louisiana Facts for Kids. Kiddle Encyclopedia.