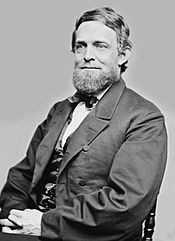 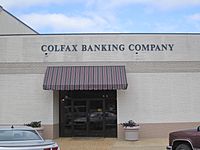 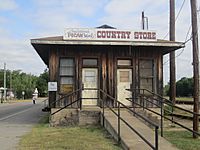 The Louisiana Pecan Festival Country Store is activated during the annual festival the first weekend of November. 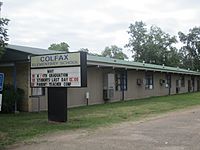 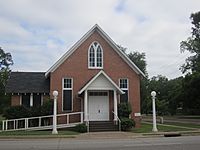 Colfax is the largest town and parish seat of Grant Parish, Louisiana, United States. The town, founded in 1869, is named for the vice president of the United States, Schuyler M. Colfax, who served in the first term of U.S. President Ulysses S. Grant, for whom the parish is named. Colfax is part of the Alexandria, Louisiana Metropolitan Statistical Area. The population of Colfax was 1,558 at the 2010 census.

During the first weekend of November, Colfax hosts the annual Louisiana Pecan Festival, an outgrowth of the centennial celebration of the town held in 1969. The festival, which draws large crowds to Colfax, includes a parade, fireworks, carnival rides, music, and the unveiling of Miss Louisiana Pecan Festival and her court. Pecans are sold whole, cracked, or shelled in bags of ten, fifteen, or twenty pounds and may also be purchased in pie or brittle form.

Colfax was settled by European Americans as a Red River port within Rapides Parish. Prior to the Civil War, it was known as "Calhoun's Landing", named for the cotton and sugar planter Meredith Calhoun, a native of South Carolina. Calhoun also published the former National Democrat newspaper in Colfax.

During the Reconstruction Era, Colfax was the scene of the Colfax massacre on Easter, April 13, 1873. Some three white attackers and about 150 African Americans were killed in one of the most egregious acts of terrorism during Reconstruction. A white militia was led against freedmen by Christopher Columbus Nash, elected sheriff on a Fusionist/Democratic slate. Freedmen were defending Republican officials at the county courthouse and had gathered there as tensions rose in a post-election dispute. A contemporary report by the U.S. military documented the three white fatalities and 105 black victims by name, with 15-20 unidentified blacks found in the Red River. Because of the disproportionate number of deaths between whites and blacks, and documented accounts that at least 50 black prisoners were executed while under control of the white militia, 20th-century historians redefined the "riot" as a "massacre". The event is significant because blacks, who comprised the majority in the county, organized to defend themselves and their political rights.

The riot arose from the disputed gubernatorial election of 1872, finally determined in the favor of the Republican William Pitt Kellogg by the federal government. Both the Fusion-Democrats and the Republicans held inaugurations and certified their own slates of local officers. Kellogg had not recognized Nash's election as sheriff. A native of Sabine Parish, Nash had been a Confederate army officer, held as a prisoner of war at Johnson's Island in Ohio from 1863 to 1865. Following the events of 1873, in 1874 Nash gathered many of the same men to establish the White League, a white supremacist paramilitary organization that operated on behalf of Democrats and eventually had chapters in many areas of Louisiana. It worked to intimidate and attack black voters, to run Republicans out of office, and to suppress black voting.

On April 13, 1921, the white citizens of Colfax unveiled a 12-foot (3.7 m) marble obelisk that read, "In Loving Remembrance, Erected to the Memory of the Heroes, Stephen Decatur Parish, James West Hadnot, Sidney Harris. Who fell in the Colfax Riot, fighting for White Supremacy, April 13, 1873."

In 1950 the state commerce department erected a historical marker identifying the site of the "Colfax Riot"; it says that the militia's victory "marked the end of carpetbag misrule in the South." Because of similar insurgent paramilitary violence in other areas of the state, especially during campaigns and elections, federal troops remained in Louisiana until 1877, when they were removed on orders of U.S. President Rutherford B. Hayes.

In 2007, the Red River Heritage Association was founded to collect and interpret the history of Reconstruction, especially in the Red River area and Louisiana. The association is raising funds to restore a bank in Colfax near the former courthouse site to use as a museum, archives and interpretive center.

There were 600 households out of which 33.3% had children under the age of 18 living with them, 30.3% were married couples living together, 32.5% had a female householder with no husband present, and 32.0% were non-families. 30.3% of all households were made up of individuals and 12.8% had someone living alone who was 65 years of age or older. The average household size was 2.55 and the average family size was 3.16.

All content from Kiddle encyclopedia articles (including the article images and facts) can be freely used under Attribution-ShareAlike license, unless stated otherwise. Cite this article:
Colfax, Louisiana Facts for Kids. Kiddle Encyclopedia.