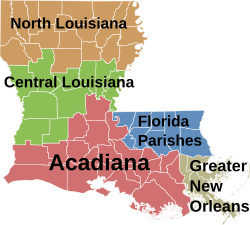 The Central Louisiana region is shaded in green.

Central Louisiana is a land of physical and cultural diversity. Extensive prairies, piney hill country, minor swamplands and deciduous forests make up its geography. It also has clear streams with sandy bottoms and large rivers that carry waterborne freight.

The economic region is Kisatchie-Delta, described as the Sixth State Planning District for the State of Louisiana, including parishes collectively bordered on the east by the Mississippi River and on the west by the Sabine River. These crossroads initially began in the 1800s as settlers migrated West and have designation as the Louisiana Colonial Trails Scenic Byways, including the historic El-Camino Real East-West Corridor.

All content from Kiddle encyclopedia articles (including the article images and facts) can be freely used under Attribution-ShareAlike license, unless stated otherwise. Cite this article:
Central Louisiana Facts for Kids. Kiddle Encyclopedia.