Pineville is a city in Rapides Parish, Louisiana, United States. It is adjacent to the city of Alexandria, and is part of that city's Metropolitan Statistical Area. The population was 14,555 at the 2010 census. It had been 13,829 in 2000; population hence grew by 5 percent over the preceding decade.

Louisiana State University was founded by the Louisiana General Assembly in 1853. It was founded under the name Louisiana State Seminary of Learning & Military Academy and was located near Pineville. The first session began on January 2, 1860, with General William Tecumseh Sherman of Ohio as superintendent.

The military opened for its fourth session in November 1862 with 112 students. Superintendent William A. Seay found the task of holding the cadets in class hopeless. According to historian John D. Winters of Louisiana Tech University:

The undisciplined young cadets with their enthusiasm for war were a continuous source of trouble. Around April 1, 1863, the cadets decided to close the school. They broke into the kitchen, smashed all the furniture, and seized all the cutlery, dishes, pots and pans, dumping them into the well. Most of the students then went home to volunteer. Professor Seay was able to keep a few students until April 23, when the excitement of the approach of Banks's army caused him to close the school and send the cadets home to fight."

This climatic region is typified by large seasonal temperature differences, with warm to hot (and often humid) summers and cold (sometimes severely cold) winters. According to the Köppen Climate Classification system, Pineville has a humid subtropical climate, abbreviated "Cfa" on climate maps.

There were 4,994 households out of which 30.8% had children under the age of eighteen living with them, 44.4% were married couples living together, 14.6% had a female householder with no husband present, and 37.5% were non-families. 32.5% of all households were made up of individuals and 12.2% had someone living alone who was 65 years of age or older. The average household size was 2.35 and the average family size was 3.00. 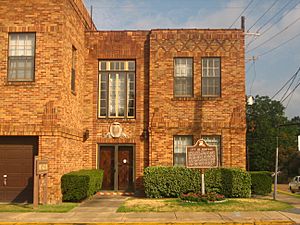 Old Town Hall Museum "is the only museum in the entire state of Louisiana dedicated to municipal government".

Located adjacent to the city is Camp Beauregard. Operated by the Louisiana Army National Guard, it is the headquarters of the 225th Engineer Brigade and is one of the largest engineer units in the US Army.

Until a special election held on October 19, 2013, Pineville had long been a fully dry city, with no alcohol available legally in the community. Voters in the 1980s maintained that stance in a referendum. The late Mayor Fred Baden was particularly known for his opposition to liquor sales. Clarence R. Fields, the first African-American mayor of Pineville, who has held his office since 1999, pushed for another referendum to permit the sale of liquor in restaurants. Nearly four years after Baden's death, the measure was roundly approved by voters in the special election, 1,849 (78 percent) to 515 (22 percent).

Liquor will become available in restaurants no sooner than January 1, 2014. Fields claims that allowing limited liquor sales, requested by area developers, will boost economic development, particularly along the riverfront. According to Fields, members of the clergy, including city council member Nathan Martin of the Christian Challenge Worship Center in Pineville, have joined the call for liquor sales: "We've had a lot of conversations with our religious community, and all of the ministers I have spoken with are favorable.".

The liquor referendum was authored by State Senator Rick Gallot. In the previous referendum in 1981, liquor sales in restaurants had not been one of the options available for consideration. Gallot's Senate Bill 116 allows cities within the population range of 13,500 to 16,500 to call for an election to permit restaurants to sell alcoholic beverages. The Pineville City Council then voted unanimously to place the referendum on the special election ballot.

All content from Kiddle encyclopedia articles (including the article images and facts) can be freely used under Attribution-ShareAlike license, unless stated otherwise. Cite this article:
Pineville, Louisiana Facts for Kids. Kiddle Encyclopedia.