Montgomery is a town in the far northwestern portion of Grant Parish, which is located in north-central Louisiana, United States. The population of Montgomery was 726 at the 2010 census. The town has a poverty rate of 37 percent and a median household income of just under $22,000. The median age is just under forty; the population in 2010 was 78 percent white.

Montgomery is part of the Alexandria Metropolitan Statistical Area though it is forty miles north of Alexandria. Founded in 1712, even before New Orleans, Montgomery is situated on U.S. Route 71, close to the boundary with Natchitoches and Winn parishes. It is located on the eastern bank of the Red River. 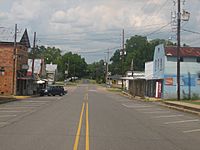 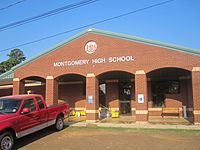 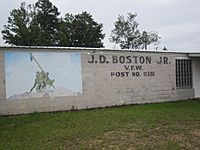 The VFW post is named for James D. Boston, Jr. (1916–1986), a World War II prisoner of war and later a history teacher at Montgomery High School. 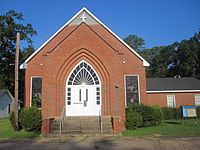 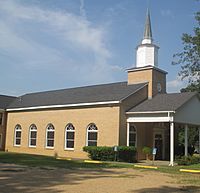 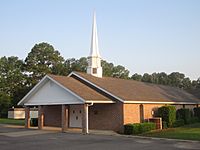 Established in 1904, the Southern Baptist-affiliated Hargis Baptist Church has worshipped in this building since 1978. Located east of Montgomery, Hargis also has a church cemetery; pastor Dr. Marvin Jones (2015). 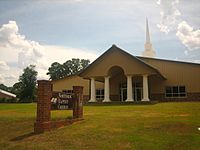 In the 1950s, Montgomery was known as one of the smaller communities in the state which could draw considerable crowds to political gatherings. William J. "Bill" Dodd, veteran Louisiana politician, in his memoirs Peapatch Politics: The Earl Long Era in Louisiana Politics, recalls a 1955 gathering in which he "eulogized" Huey Long, Earl Long, and attorney general candidate Jack P.F. Gremillion. Dodd satirized Gremillion's World War II record: "Why he almost got killed himself when an enemy shell plowed into one of his most vital organs; if you don't believe Jack Gremillion earned his Purple Heart, he will show you the scars he has to prove it." The scars were on Gremillion's rear end, much to the embarrassment of the successful candidate. From Montgomery, the Long train headed to the parish seat of Colfax.

According to the United States Census Bureau, the town has a total area of 2.1 square miles (5.4 km²), all of it land.

The Reverend Kevin Billiot is both the pastor of Northside Church and the part-time police chief in Montgomery, for which he earns $20,000 a year. Police officers make $7.50 an hour. "When I arrived here as police chief in April (2011), we didn't have uniforms. We didn't even have badges. We had two badges we shared among ourselves" and wore polo shirts with embroidered badges, Billiot explained."

Current Montgomery Mayor Vera "Susie" Waters, who is paid $265 per month, but also works as office manager for two pharmacies, said that small-town finances "aren't in good shape right now. Any kind of equipment we purchase, we rely strictly on grants. When we can get a donation of equipment it's just a wonderful thing."

All content from Kiddle encyclopedia articles (including the article images and facts) can be freely used under Attribution-ShareAlike license, unless stated otherwise. Cite this article:
Montgomery, Louisiana Facts for Kids. Kiddle Encyclopedia.