Creola is an incorporated village in Grant Parish, Louisiana, United States. It was incorporated on January 23, 2002, under the provisions of the Lawrason Act. An incorporation election was held in October 2000 with 36 people (97.3%) voting in favor of the measure and 1 (2.7%) voting against. As of the 2010 census, Creola had a population of 213.

Creola is located in the southern portion of Grant Parish and is part of the Alexandria Metropolitan Statistical Area. 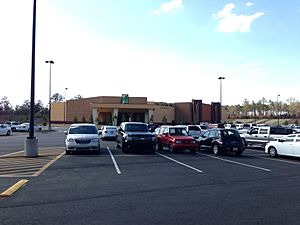 The Jena Choctaw Pines Casino opened on February 13, 2013. The casino, owned by the Jena Band of Choctaw Indians, sits on over 200 acres (81 ha) of land, 40 acres (16 ha) of which within Creola were donated by local businessman Mike Wahlder to develop the casino. It will be a Class II casino under Indian Gaming laws. It is the first phase of the casino project that features 46,000 square feet (4,300 m2) of gaming space containing 700 slots and a poker room, and also featuring a sport bar and a buffet. The revenue collected from the casino will help the Jena Band of Choctaws fulfill unmet needs for housing, education, and health care. This will be the third casino in the central Louisiana area.

According to the casino's general manager, John Neumann, future expansion of the casino was expected within at least six months. The next phase of the project was to include expanding the gaming area and restaurant nearly doubling the space, meeting spaces to the main building, and a hotel. The overall master plan is to also include a RV park, an entertainment venue, and a strip mall.

Creola residents are zoned to Grant Parish School Board schools.

All content from Kiddle encyclopedia articles (including the article images and facts) can be freely used under Attribution-ShareAlike license, unless stated otherwise. Cite this article:
Creola, Louisiana Facts for Kids. Kiddle Encyclopedia.