Kids Encyclopedia Facts
Not to be confused with Jackson, Louisiana.

Jackson Parish (French: Paroisse de Jackson) is a parish located in the northern part of the U.S. state of Louisiana. As of the 2010 census, the population was 16,274. The parish seat is Jonesboro. The parish was formed in 1845 from parts of Claiborne, Ouachita, and Union Parishes. In the twentieth century, this part of the state had several small industrial mill towns, such as Jonesboro.

Jackson Parish was founded in 1845 and named for President Andrew Jackson.

During the American Civil War Confederate General Richard Taylor sent five companies into Jackson and Winn parishes to arrest conscripts who failed to report for duty and to halt jayhawker groups in the area. General Edmund Kirby-Smith, moreover, directed that "all men who shirked their military duty be hunted down and forced into camp. Those who tried to escape the conscript hunters would be shot. The terrain of Louisiana with its many canebrakes, swamps, and hills in which to hide, made such an order difficult to carry out," explains the historian John D. Winters in The Civil War in Louisiana (1963).

A Company 199TH FSB (Forward Support Battalion) of the 256TH IBCT resides in Jonesboro, Louisiana. This unit has deployed twice to Iraq in 2004-5 and 2010. Also deployed in 1990 for Operation Desert Shield/Desert Storm. 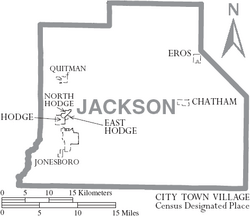 All content from Kiddle encyclopedia articles (including the article images and facts) can be freely used under Attribution-ShareAlike license, unless stated otherwise. Cite this article:
Jackson Parish, Louisiana Facts for Kids. Kiddle Encyclopedia.