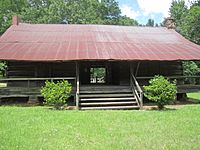 Autrey Dogtrot House, built in 1849 by Absalom and Elizabeth Norris Autrey, formerly of Selma, Alabama is located west of Dubach. The oldest restored dogtrot house in Lincoln Parish, it was listed in 1980 on the National Register of Historic Places. 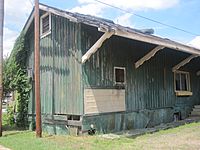 Historic Vicksburg, Shreveport, and Pacific Railroad depot in downtown Ruston; Robert Edwin Russ, the founder of Ruston, sold land to the railroad in 1883.

Lincoln Parish (French: Paroisse de Lincoln) is a parish located in the U.S. state of Louisiana. As of the 2010 census, the population was 46,735. The parish seat is Ruston. The parish was created on February 24, 1873, from parts of Bienville, Claiborne, Union, and Jackson parishes, and its boundaries have changed only once (in 1877). This makes Lincoln Parish one of the Reconstruction parishes.

Since the late 20th century, archeologists have dated eleven sites in northern Louisiana where thousands of years ago, indigenous cultures built complexes with multiple, monumental earthwork mounds during the Middle Archaic period, long before the development of sedentary, agricultural societies. At sites such as Watson Brake, Frenchman's Bend, and Caney, generations of hunter-gatherers worked for hundreds of years to build and add to mound complexes. Hedgepeth Site, located in Lincoln Parish, is dated about 5200-4500 BP (about 3300-2600 BCE), from the latter part of this period. Such finds are changing the understanding of early human cultures.

The parish was one of several new ones established by the state legislature during Reconstruction; in 1873 it was formed from land that had belonged to Bienville, Claiborne, Jackson and Union parishes to create one in which newly elected representatives might have more ties to the Republican Party. It was an attempt to break up the old order of political power, and to capitalize on the arrival of the railroad line. The parish is named for the late U.S. president Abraham Lincoln.

In 1934, the historian Robert W. Mondy of Louisiana Tech University in Ruston completed a thesis entitled "A History of Lincoln Parish, Louisiana" as part of the requirements for his Master of Arts degree from the University of Texas at Austin. Another Louisiana Tech faculty member, Robert C. Snyder, was instrumental in the establishment in 1962 of the Lincoln Parish Library. He served as the library board president for many years.

527th Engineer Battalion (Triple Alpha) ("Anything, Anytime, Anywhere") is headquartered in Ruston, Louisiana, the parish seat. This battalion is part of the 225th Engineer Brigade of the Louisiana National Guard. 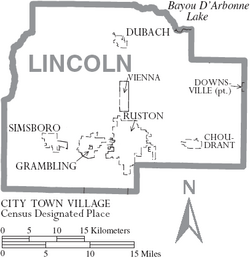 All content from Kiddle encyclopedia articles (including the article images and facts) can be freely used under Attribution-ShareAlike license, unless stated otherwise. Cite this article:
Lincoln Parish, Louisiana Facts for Kids. Kiddle Encyclopedia.