Choudrant is a village in Lincoln Parish, Louisiana, United States. The population was 845 at the 2010 census. It is part of the Ruston Micropolitan Statistical Area.

According to the United States Census Bureau, the village has a total area of 1.8 sq mi (4.7 km2), all land. 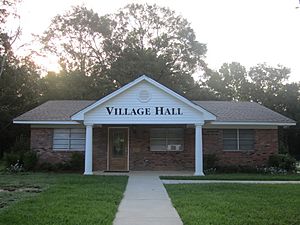 There were 234 households, out of which 35.5% had children under the age of 18 living with them, 56.4% were married couples living together, 11.5% had a female householder with no husband present, and 28.6% were non-families. 24.8% of all households were made up of individuals, and 8.1% had someone living alone who was 65 years of age or older. The average household size was 2.49 and the average family size was 2.98.

As a village, Choudrant has limited business opportunity. There are several "home grown" businesses within the village limits. Some of the more notable are Parnell's Station, Choudrant Mini Mart, and Choudrant Appliance. The most prominent of local businesses is Origin Bank, founded as the Bank of Choudrant. It has since grown to become one of the largest banks in both Lincoln Parish and the neighboring Ouachita Parish. Despite its growth though, the FDIC still recognizes the original Choudrant branch as its home office. Origin Bank also sponsored the Louisiana Peach Festival in Ruston until 2005, whence sponsorship was taken up by Squire Creek Country Club.

A Pilgrim's Pride poultry hatchery in Choudrant was marked for closure early in 2009, along with other company operations in nearby Arcadia in Bienville Parish, Athens in Claiborne Parish, and Farmerville in Union Parish. The closures cost this part of North Louisiana some 1,300 jobs. Several weeks later, however, Pilgrim's Pride accepted an $80 million offer from Foster Farms of California to purchase the operations. In addition, to the 1,300 direct jobs in Farmerville, the purchase spares the small farms of some three hundred independent growers. Foster Farms put up $40 million and the State of Louisiana a matching $40 million. Foster Farms will further invest $10 million in capital improvements at the Farmerville plant, to be matched by the state, in an agreement announced by Governor Bobby Jindal. 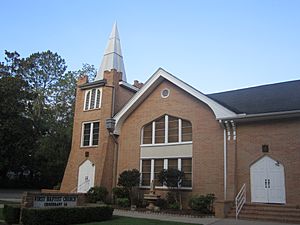 Choudrant is located within the fifth district of the Lincoln Parish School System. There are two schools within the Choudrant district—Choudrant Elementary and Choudrant High. The elementary school services between 400 and 450 students in grades K-6 while the high school contains approximately 350 students in grade levels 7-12. Both schools are well known as having high academic achievement under the state's school improvement plan and No Child Left Behind. The high school was rebuilt in 1937 after a fire and has had no substantive renovations or updates since that time. Choudrant Elementary was similarly rebuilt and expanded after a fire in the 1970s, but the student population had outgrown its walls. However, attempts to renovate the high school and rebuild the elementary school were halted in 2007 when citizens of the school district voted by a 2-1 majority against passage of a bond issue to fund such changes. The Tax later passed a couple years later. Since then the high school has been rebuilt and added an entire new wing, a new ag center and a new track.

All content from Kiddle encyclopedia articles (including the article images and facts) can be freely used under Attribution-ShareAlike license, unless stated otherwise. Cite this article:
Choudrant, Louisiana Facts for Kids. Kiddle Encyclopedia.