Bienville Parish (French: Paroisse de Bienville) is a parish located in the northwestern portion of the U.S. state of Louisiana. At the 2020 census, the population was 12,981. The parish seat is Arcadia.

The highest natural point in Louisiana, a hill known as Mt. Driskill, 535 feet (163 m) in elevation, is located in north central Bienville Parish. The mountain is located on private land with public access by walking trail. It is named for James Christopher Driskill, a 19th-century landowner. Nearby is Jordan Mountain, with an elevation of 493 feet (150 m).

In the 1830s, Ruben Drake moved his family from South Carolina to what he named Mount Lebanon, the first permanent settlement in the parish. As the Drakes were devout Baptists, they established a church and school, which evolved into Mount Lebanon University, the forerunner of Louisiana College in Pineville in Rapides Parish in Central Louisiana.

On March 14, 1848, the Louisiana State Legislature created Bienville Parish from the lower portion of Claiborne Parish. Bienville Parish was named in honor of the French Canadian explorer Jean-Baptiste Le Moyne, Sieur de Bienville, who was governor of French Louisiana for a total of thirty years.

The original parish seat was Sparta, a defunct community located between Bienville and Ringgold. All that remains of Sparta are two cemeteries. Among the early settlers of Sparta were the brothers Green and James Huckaby, ancestors of later U.S. Representative Jerry Huckaby of Louisiana's 5th congressional district. The courthouse was moved to Arcadia in 1893.

During the American Civil War, Bienville Parish was strongly Confederate but was spared fighting in its immediate area. Instead parish residents participated in the building of fortifications on the nearby Red River. Much of this work was done by slaves hired out by planters.

In 1864, Governor Henry Watkins Allen named Dr. Bartholomew Egan of Bienville Parish to establish a laboratory for the manufacture of medicines. Egan bought out the former Mount Lebanon Female Academy and nearly a hundred acres of land to turn out turpentine and medicinal whisky. He also produced castor oil (The Bienville Parish community of Castor, established in 1900 is named for castor oil.) and a quantity of opium. Winters explains that the "native wild white poppy produced an opium equal in strength and effectiveness to the imported product."

The notorious bandits Bonnie and Clyde were shot dead in Bienville Parish on May 23, 1934. The Bonnie and Clyde Ambush Museum in Gibsland contains memorabilia about the killing. It is operated by Ted Hinton, the son of Ted Hinton, one of the officers involved in the ambush. 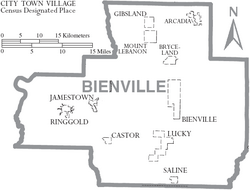 All content from Kiddle encyclopedia articles (including the article images and facts) can be freely used under Attribution-ShareAlike license, unless stated otherwise. Cite this article:
Bienville Parish, Louisiana Facts for Kids. Kiddle Encyclopedia.