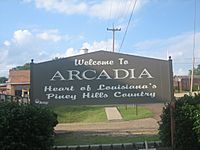 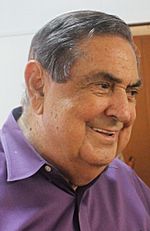 Eugene Smith (2016 photo), the mayor of Arcadia since 2003, retired from the state driver's license bureau. 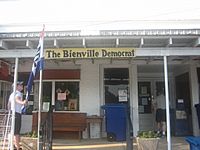 The Bienville Democrat office in Arcadia 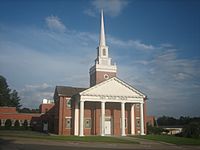 First Baptist Church of Arcadia; the Louisiana Baptist Convention was founded nearby in Mount Lebanon in 1848. 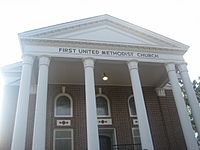 Arcadia is a town in and the parish seat of Bienville Parish in north Louisiana, United States. The population was 2,919 at the 2010 census. Arcadia has the highest elevation of any town in Louisiana.

In 1934, Bonnie and Clyde were sought throughout the Southeast for their robbing banks and associated crimes. They were killed near Arcadia by law-enforcement officers from Bienville Parish and Dallas County, Texas. The ambush occurred southwest of Arcadia on Louisiana State Highway 154 between Gibsland and Sailes. Gibsland has been a destination for tourism associated with Bonnie and Clyde. L.J. "Boots" Hinton, son of posse member Ted Hinton, operates the Bonnie and Clyde Ambush Museum.

Arcadia has been a center of the poultry industry, with up to 300 independent growers for years supplying the feed mill of Pilgrim's Pride, a poultry company, in Arcadia. In 2009 the company announced the closing of the mill and ending of other operations in nearby Athens in Claiborne Parish, Choudrant in Lincoln Parish, and Farmerville in Union Parish. The closings were estimated to cost North Louisiana a combined 1,300 jobs. Several weeks later, Pilgrim's Pride accepted an $80 million offer from Foster Farms of California to purchase their operations. In addition to the 1,300 direct jobs, mostly in Farmerville, the purchase provides a continuing market for some 300 growers. Foster Farms put up $40 million and the State of Louisiana a matching $40 million. Foster Farms will invest $10 million in capital improvements at the Farmerville plant, to be matched by the state, in an agreement announced by Governor Bobby Jindal.

According to the United States Census Bureau, the town has a total area of 3.1 square miles (7.9 km2), all land.

All content from Kiddle encyclopedia articles (including the article images and facts) can be freely used under Attribution-ShareAlike license, unless stated otherwise. Cite this article:
Arcadia, Louisiana Facts for Kids. Kiddle Encyclopedia.