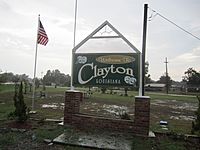 Clayton is a town in northern Concordia Parish, Louisiana, United States. The population was 711 at the 2010 census. Cotton is a principal commodity in the area. Clayton is located on the Tensas River, important for fishing and boating, promoted through a U.S. Army Corps of Engineers-maintained boat launch. The Tensas River merges with the Black River in Jonesville in Catahoula Parish.

Louisiana State Representative Andy Anders is from Clayton and Ferriday.

Among the businesses in the community are Cross Keys Bank and David's Grocery. 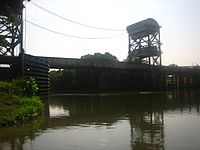 The Tensas River at Clayton, Louisiana

There were 317 households out of which 34.1% had children under the age of 18 living with them, 32.8% were married couples living together, 31.9% had a female householder with no husband present, and 30.3% were non-families. 24.9% of all households were made up of individuals and 12.9% had someone living alone who was 65 years of age or older. The average household size was 2.71 and the average family size was 3.24.

All content from Kiddle encyclopedia articles (including the article images and facts) can be freely used under Attribution-ShareAlike license, unless stated otherwise. Cite this article:
Clayton, Louisiana Facts for Kids. Kiddle Encyclopedia.