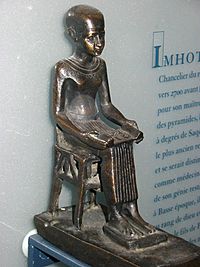 A statue of Imhotep

Imhotep was a high priest in ancient Egypt, and had many other important skills. He was born in Ankhtowe on the 16th day of Epiphi. Epiphi is the third month of the Egyptian harvest season. His mother was Khreduonkh and father was Kanofer an architect. Imhotep also became famous as an architect. After his death, because of his attachment with the god Ptah during his work at Ptah's temple stories were spread that said that Ptah was his father. As a god he was often pictured seated, wearing a long kilt robe and a skull cap or a shaven head. He had a papyrus scroll spread on his lap to show his scholarly nature and scribal assistance. 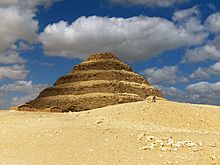 As an architect Imhotep was most famous because he was the designer of the step pyramid. Before the step pyramid, pharaohs were buried in flat topped structures called mastabas. The term mastaba comes from the word meaning bench because they look like the benches most Egyptians placed outside their door. An average mastaba had four walls, a flat top and an underground burial chamber, reached by a vertical shaft or stairwell. There were also a couple of small rooms above the burial chambers containing various items for the afterlife. The step pyramid was actually just a number of mastabas placed one on top of the other, each one smaller than the previous one.Imhotep was the architect, physician, scribe, and grand vizier of the IIIrd Dynasty pharaoh Zoser. It was Imhotep who conceived and built the Step Pyramid at Sakkara. In the Late Period, Imhotep was worshipped as the son of Ptah and a god of medicine, as well as the patron (with Thoth) of scribes. The Greeks considered him to be Asklepios. 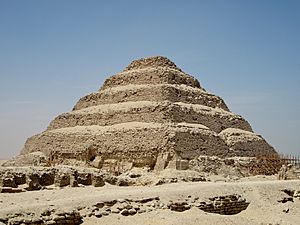 Imhotep’s best-known writings were medical scrolls. He is thought to have written the Edwin Smith papyrus. The papyrus consists of 48 injuries of which 27 are head trauma, and six are spine trauma. Here’s an example for treatment of a head injury: “Examination: If thou examinest a man having a wound in his head, while his wound does not have two lips, penetrating to the bone of his skull, (but) not having a gash, thou shouldst palpate his wound (or, thou shouldst lay thy hand upon it); shouldst thou find his skull uninjured, not having a perforation; a split, or a smash in it. Treatment: Thou shouldst bind it with fresh meat the first day (and) treat afterwards with grease, honey (and) lint every day until he recovers wound in the head”

Around 100 years after his death Imhotep was deified (made into a god). He became the god of medicine and healing. Small temples were built in honor of him. People with injuries would sleep near his temple hoping to be healed. As a god, Imhotep was also worshiped by scribes. Scribes would offer a couple drops of water in libation to him before starting to write. Even when the Greeks took over, he was identified with another deified man called Asclepius and the Greeks continued to honor and build temples for him. This continued until the Arab invasion in North Africa in the 7th century AD. Imhotep did many things that boosted Egyptian society to amazing heights. He was the architect that changed Egyptian funeral architecture from mastabas to the phenomenal structures we today call pyramids. As a physician he healed many people and saved many lives, which after his death lead to him becoming a medicine god.

All content from Kiddle encyclopedia articles (including the article images and facts) can be freely used under Attribution-ShareAlike license, unless stated otherwise. Cite this article:
Imhotep Facts for Kids. Kiddle Encyclopedia.