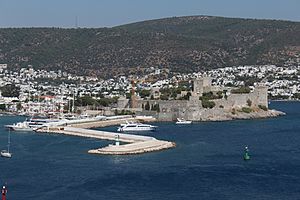 The headquarters of the Knights Hospitaller were on the island of Rhodes. In 1402 their fortifications at İzmir fell to the Mongols under Tamerlane. Threatened by an invasion of the Seljuks they built the castle at Bodrum. Its location was the site of a fortification during the Doric Greek period. There was also a small Seljuk castle in the 11th century. The same promontory is also the probable site of the palace of Mausolos. He was the king of Caria. The construction of the castle began in 1404. It was fully fortified by 1460. Bodrum came under its final siege in 1522. At the time it was still strong enough to send men to Rhodes. After Rhodes fell, the castle surrendered.

The Museum of Underwater Archaeology is housed inside the castle. One of its displays is one of the world's oldest ships believed to come from the 6th century. Another is called the glass shipwreck due to the large number of bottles it was carrying.

All content from Kiddle encyclopedia articles (including the article images and facts) can be freely used under Attribution-ShareAlike license, unless stated otherwise. Cite this article:
Bodrum Castle Facts for Kids. Kiddle Encyclopedia.