The Salt Lake Temple is a temple of The Church of Jesus Christ of Latter-day Saints (LDS Church) on Temple Square in Salt Lake City, Utah, United States. At 253,015 square feet (23,505.9 m2), it is the largest LDS temple by floor area. Dedicated in 1893, it is the sixth temple completed by the church, requiring 40 years to complete, and the fourth temple built since the Mormon exodus from Nauvoo, Illinois, in 1846. On April 19, 2019 the LDS Church announced that the temple would close on December 29, 2019 for seismic renovations that are anticipated to take approximately four years. 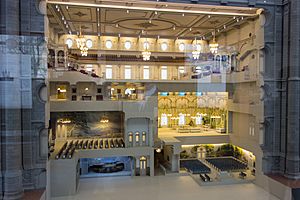 Cutaway model showing the interior layout of the temple

The Salt Lake Temple is the centerpiece of the 10-acre (4.0 ha) Temple Square in Salt Lake City, Utah. Like other LDS temples, the church and its members consider it sacred and a temple recommend is required to enter, so there are no public tours inside the temple as there are for other adjacent buildings on Temple Square. In 1912, the first public photographs of the interior were published in the book The House of the Lord, by James E. Talmage. Since then, various photographs have been published, including by Life magazine in 1938. The temple grounds are open to the public and are a popular tourist attraction. Due to its location at LDS Church headquarters and its historical significance, Latter-day Saints from around the world patronize the temple.

The Salt Lake Temple is also the location of the weekly meetings of the First Presidency and the Quorum of the Twelve Apostles. As such, there are special meeting rooms in the building for these purposes, including the Holy of Holies, which are not part of other temples.

The temple includes some elements thought to evoke Solomon's Temple at Jerusalem. It is oriented towards Jerusalem and the large basin used as a baptismal font is mounted on the backs of twelve oxen, as was the Molten Sea in Solomon's Temple (see Chronicles 4:2–4). (However, the literal interpretation of the Biblical verses has been disputed.) At the east end of the building, the height of the center pinnacle to the base of the angel Moroni is 210 feet, or 120 cubits, making this Temple 20 cubits taller than the Temple of Solomon.

In 1999, as the building of LDS temples accelerated, the church announced a formal naming convention for all existing and future temples. For temples in the United States and Canada, the temple's name is generally the city or town in which the temple is located, followed by the name of the applicable state or province (with no comma). For temples outside of the U.S. and Canada, the temple's name is generally the city name (as above) followed by the country name. However, for reasons on which the church did not elaborate, the Salt Lake Temple was not renamed the "Salt Lake City Utah Temple". (The Provo City Center Temple is the only other temple that does not include a state, province, or country in the temple's name.)

The temple is in downtown Salt Lake City, with several mountain peaks close by. Nearby, a shallow stream, City Creek, splits and flows both to the west and to the south, flowing into the Jordan River. There is a wall around the 10-acre (4.0 ha) temple site. The surrounding wall became the first permanent structure on what has become known as Temple Square. The wall is a uniform 15 feet high but varies in appearance because of the site's southwest slope.

The temple is considered the house of God and is reserved for special ceremonies for practicing Latter-Day Saints. The main ordinance rooms are used during the endowment ceremony—namely the creation, garden, telestial, terrestrial, and celestial rooms in that order of use. A washing and anointing ceremony is also administered, and until 1921, the rooms were also used for healing rituals of washing and anointing for the sick or pregnant and were administered by women and men. The temple also serves as a place for marriage sealing ceremonies for live and deceased persons. Additional uses include functioning as a location for baptisms for the dead, baptisms for health (until being discontinued in 1921), and, briefly, for re-baptism for the renewal of covenants. Other rituals performed in the temple include the second anointing ordinance for live and deceased persons, and meeting rooms for church leaders. 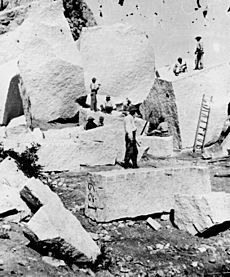 Granite for temple being quarried at Little Cottonwood Canyon (1872)

The temple's location was first marked by LDS prophet Brigham Young, the second president of the church, on July 28, 1847, just four days after he arrived in the Salt Lake Valley. In 1901 the apostle Anthon H. Lund recorded in his journal that "it is said" that Oliver Cowdery's divining rod was used to locate the temple site. The temple site was dedicated on February 14, 1853 by Heber C. Kimball. Groundbreaking ceremonies were presided over by Young, who laid the cornerstone on April 6 of that year. The architect was Truman O. Angell, and the temple features both Gothic and Romanesque elements.

Sandstone was originally used for the foundation. During the Utah War, the foundation was buried and the lot made to look like a plowed field to prevent unwanted attention from federal troops. After tensions eased in 1858 and work on the temple resumed, it was discovered that many of the foundation stones had cracked, making them unsuitable for use. Although not all of the sandstone was replaced, the inadequate sandstone was replaced. The walls are quartz monzonite (which has the appearance of granite) from Little Cottonwood Canyon, twenty miles (32 km) southeast of the temple site. Oxen transported the quarried rock initially, but as the Transcontinental Railroad neared completion in 1869 the remaining stones were carried by rail at a much faster rate.

A plaque with construction details

The capstone—the granite sphere that holds the statue of the Angel Moroni—was laid on April 6, 1892, by means of an electric motor and switch operated by Wilford Woodruff, the church's fourth president, thus completing work on the temple's exterior. The Angel Moroni statue, standing 12.5 feet (3.8 m) tall, was placed on top of the capstone later the same day. At the capstone ceremony, Woodruff proposed the building's interior be finished within one year, which would allow the temple to be dedicated forty years to the day of its commencement. John R. Winder was instrumental in overseeing the interior's completion on schedule; he would serve as a member of the temple presidency until his death in 1910. Woodruff dedicated the temple on April 6, 1893, exactly forty years after the cornerstone was laid.

In late 2019 the temple was closed for a seismic retrofitting which will allow to withstand a magnitude 7.3 earthquake, the strongest expected magnitude in the Salt Lake Valley; work is expected to take about four years. Other facilities in Temple Square (and certain parts of the main temple) will be demolished, reconstructed, and modernized inline with seismic code. Mechanical, electrical, and plumbing systems will be replaced, The interior and its historical artifacts will be preserved and plazas and landscaping modified. Visitor access and tourism will still remain during the entire renovation process, but in regulated and coordinated fashion.

See also: Symbolism in The Church of Jesus Christ of Latter-day Saints, Temple architecture (LDS Church), and Mormonism and Freemasonry

The Salt Lake Temple incorporates many symbolic adornments including Masonic symbols. Symbolism is an important subject in the LDS faith. These symbols include the following: 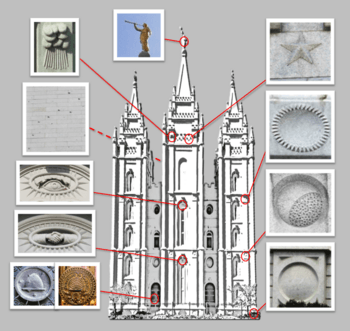 Some the temple's exterior symbols 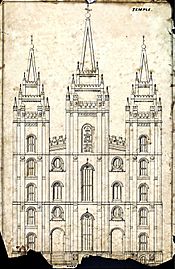 Original 1854 design of the East side showing the horizontal angel, Sun faces, earth details, and compass and square window details. These elements were later modified or removed. 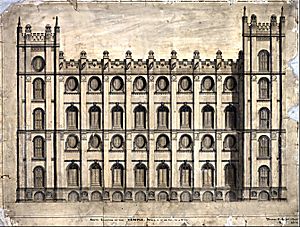 All content from Kiddle encyclopedia articles (including the article images and facts) can be freely used under Attribution-ShareAlike license, unless stated otherwise. Cite this article:
Salt Lake Temple Facts for Kids. Kiddle Encyclopedia.