The jungle cat (Felis chaus), also called reed cat and swamp cat, is a medium-sized cat native to the Middle East, South and Southeast Asia and southern China. It inhabits foremost wetlands like swamps, littoral and riparian areas with dense vegetation. It is listed as Least Concern on the IUCN Red List, and is mainly threatened by destruction of wetlands, trapping and poisoning.

The jungle cat has a uniformly sandy, reddish-brown or grey fur without spots; melanistic and albino individuals are also known. It is solitary in nature, except during the mating season and mother-kitten families. Adults maintain territories by scent marking. Its preferred prey is small mammals and birds. It hunts by stalking its prey, followed by a sprint or a leap; the ears help in pinpointing the location of prey. Births take place between December and June, though this might vary geographically. Kittens begin to catch their own prey at around six months and leave the mother after eight or nine months.

The distribution of jungle cat is largely oriental; it occurs in the Middle East, the Indian subcontinent, central and Southeast Asia, Sri Lanka and in southern China. It is the most common small wild cat in India. 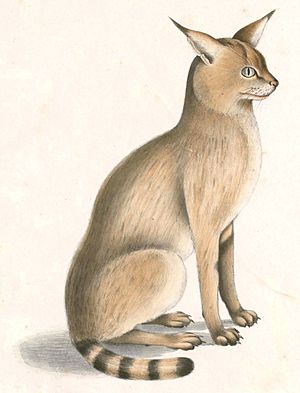 Illustrations of Indian Zoology- Jungle cat between 1830 and 1832

A habitat generalist, the jungle cat inhabits places with adequate water and dense vegetation, such as swamps, wetlands, littoral and riparian areas, grasslands and shrub. It is common in agricultural lands, such as fields of bean and sugarcane, across its range, and has often been sighted near human settlements.

As reeds and tall grasses are typical of its habitat, it is known as "reed cat" or "swamp cat". It can thrive even in areas of sparse vegetation, but does not adapt well to cold climates and is rare in areas where snowfall is common. It shuns rainforests and woodlands.

A few jungle cat mummies were found among the cats in ancient Egypt.

The jungle cat is listed under CITES Appendix II. Hunting is prohibited in Bangladesh, China, India, Israel, Myanmar, Pakistan, Tajikistan, Thailand and Turkey. But it does not receive legal protection outside protected areas in Bhutan, Georgia, Laos, Lebanon, Nepal, Sri Lanka and Vietnam.

All content from Kiddle encyclopedia articles (including the article images and facts) can be freely used under Attribution-ShareAlike license, unless stated otherwise. Cite this article:
Jungle cat Facts for Kids. Kiddle Encyclopedia.