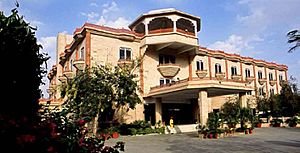 Ajmer is one of the big cities in Rajasthan, India. Ajmer is the headquarters of the Ajmer district. The city was established by a Chauhan ruler Shakambhari Chahamana and also served as the capital in 12th century.Ajmer is surrounded by Aravalli Mountains. The population of Ajmer according to 2011 census is 542,580 and in the urban agglomeration 551,360.

All content from Kiddle encyclopedia articles (including the article images and facts) can be freely used under Attribution-ShareAlike license, unless stated otherwise. Cite this article:
Ajmer Facts for Kids. Kiddle Encyclopedia.