The Bengal fox (Vulpes bengalensis), also known as the Indian fox, is a fox endemic to the Indian subcontinent from the Himalayan foothills and Terai of Nepal through southern India, and from southern and eastern Pakistan to eastern India and southeastern Bangladesh. 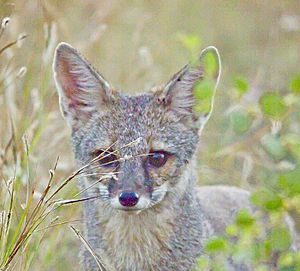 Vulpes bengalensis is a relatively small fox with an elongated muzzle, long, pointed ears, and a bushy tail about 50 to 60% of the length of the head and body.

Its dorsal pelage is very variable, but mostly grayish.

The tail is bushy with a prominent black tip. 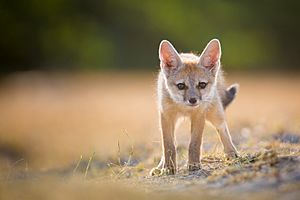 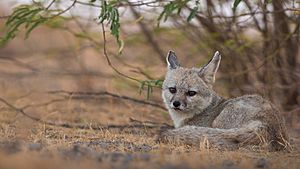 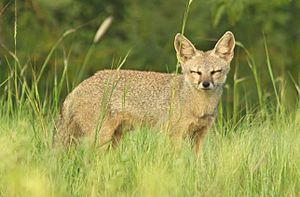 The Bengal fox is distributed throughout much of the Indian subcontinent with the exception of the wet forests and the extreme arid zone. Its range is bounded by the Himalayas and the Indus River valley. Its preferred habitat is short open grassland, scrub or thorn forest. It appears to avoid steep terrain and tall grassland. It was considered to be a habitat generalist, but it shows a strong preference for semiarid, short grassland habitats at multiple scales. 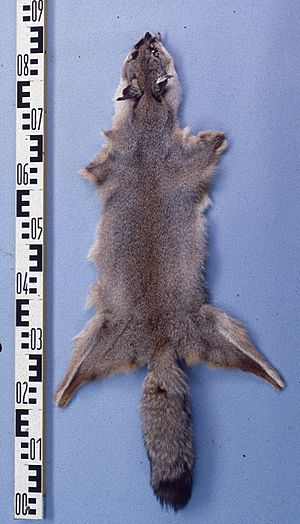 Bengal foxes are mainly crepuscular in their habits. During the heat of the day, they hide under vegetation or in subterranean dens that they dig. The dens are large and complex with multiple chambers and escape routes. They are sometimes seen basking at a vantage point around sunrise or sunset. In captivity, the lifespan is about 6 to 8 years.

The Bengal fox feeds on rodents, reptiles, crabs, termites, insects, small birds, and fruits. Scats of young pups appeared to show that they fed mainly on rodents but are opportunistic feeders. 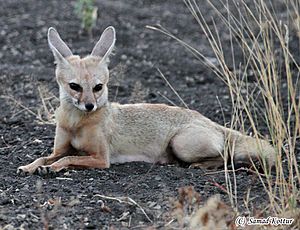 Foxes make a wide range of vocalizations. A chattering cry is the most common call. They also growl, whine, whimper, and bark. They can be heard howling in the night in groups.

The Bengal fox forms pair bonds that may last a lifetime. After a gestation period around 50–60 days, two to four pups are born in a den. Both parents participate in pup-rearing. The pups are fully weaned about 3–4 months after emerging from the den.

All content from Kiddle encyclopedia articles (including the article images and facts) can be freely used under Attribution-ShareAlike license, unless stated otherwise. Cite this article:
Bengal fox Facts for Kids. Kiddle Encyclopedia.