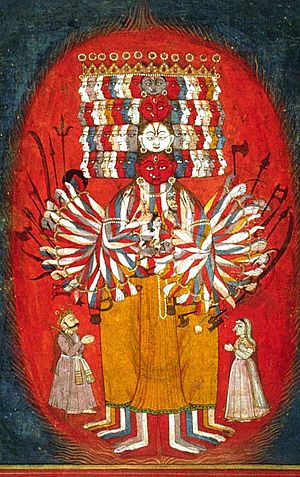 Krishna displays his Vishvarupa (universal form) to Arjuna on the battlefield of Kurukshetra.

Monotheism is the belief in only one god, rather than two or more, which would be polytheism such as Ancient Greece, Ancient Rome, and Ancient Egypt. Many religions are monotheistic, such as Judaism, Christianity, Islam, Baha'i Faith, Sikhism, Eckankar, Zoroastrianism, deism, Cao Dai and Tenrikyo. Zoroastrianism is among the oldest monotheistic religions.

All content from Kiddle encyclopedia articles (including the article images and facts) can be freely used under Attribution-ShareAlike license, unless stated otherwise. Cite this article:
Monotheism Facts for Kids. Kiddle Encyclopedia.